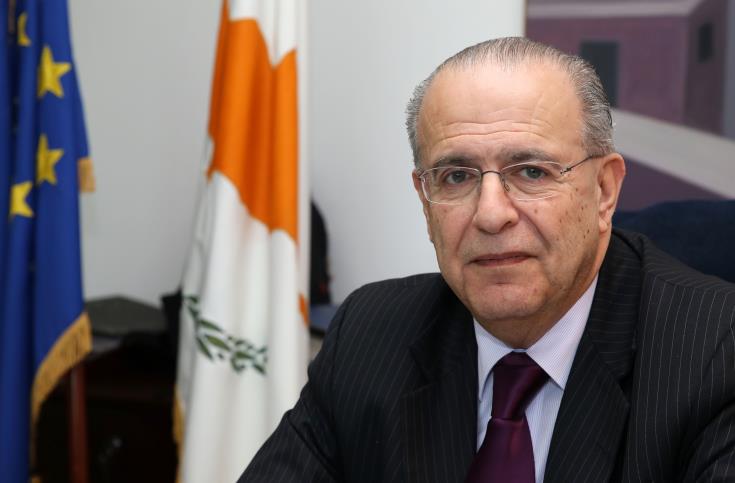 Asked by the Cyprus News Agency (CNA) to comment on media reports on the EastMed and the US stance on the project, Kasoulides said that “if the results of the financial feasibility study are positive, we will consider the other problems.Otherwise the EastMed is not workable.

Asked to comment on the fact that the research vessel Nautical Geo was harassed by a Turkish frigate in the exclusive economic zone of Cyprus, the foreign minister said that there was indeed harassment that cannot go unanswered. “We cannot say that it is not serious, and for this reason, all the necessary representations will be made”, he added.

Regarding the EastMed pipeline, Kasoulides said that when the decision was made, “it was subject to a positive financial feasibility study”.

He noted that this is a project that requires a huge investment, and certainly if the EastMed would be self-funded, its implementation could continue.

The foreign minister said the European Commission had committed to funding the feasibility study, adding that “we are now awaiting the results of the feasibility study and if they are positive we will proceed with the examination other questions. Otherwise, the EastMed is not feasible.

When asked if they were concerned about statements made on the issue by the United States and the position set out by Amos Hochstein, the special envoy and coordinator for international energy affairs, who heads the Bureau of Energy Resources from the US State Department, Kasoulides replied, “No, we are not worried for the simple reason that what Hochstein is saying now, we have also been saying since the decision was made to have a financial feasibility study.

“If there was no financial feasibility, we all know the project would not go ahead,” he added.

“In democracies, it is inevitable when elections have to be held. And we didn’t have an election,” he added.

Discussion at the UN Security Council

Asked about Monday’s discussion in the UN Security Council on the UN Secretary-General’s reports regarding his Good Offices Mission and the UN Peacekeeping Force in Cyprus (UNFICYP), Kasoulides said that “we did not have any surprises in the draft resolution (for the renewal of the mandate of UNFICYP), that would make it unacceptable or negative. We have some comments that the permanent representation (of the Republic of Cyprus) will transmit, in the usual way, first to the penholder, who is the British representative, and to the other permanent members of the Security Council.

Books of condolences for David Sassoli

Cyprus has been divided since 1974, when Turkey invaded and occupied its northern third. Repeated rounds of UN-led peace talks have so far failed to yield results. The last round of negotiations, in July 2017 in the Swiss resort of Crans-Montana, ended without result.