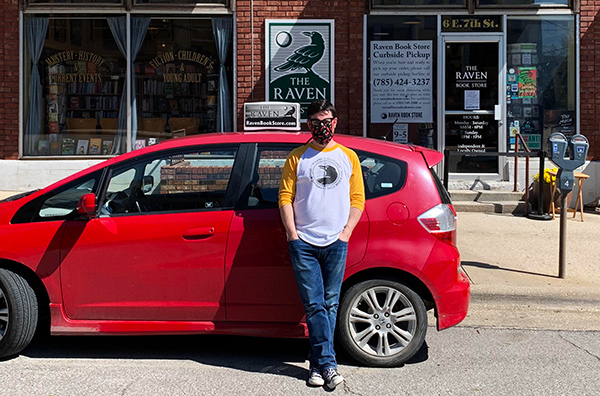 In my heart it seemed to fit so well, ”Danny Caine, former high school teacher and published poet, recalled of his decision to buy the Raven Book Store in Lawrence, Kans., In 2017, a few months after finishing his MFA in poetry at the University of Kansas. “Of course, I didn’t want to make a bad business decision. It wasn’t just that I wanted to avoid financial ruin for myself. It was also important for me to be a good steward for the store, which has been around for so long and has an extremely passionate and loyal following. I knew if I did something wrong to the Raven, I would be kicked out of town.

The Raven, founded by Mary Lou Wright and Pat Kehde in 1987, began as a mystery specialty store that also carried local titles. During the store’s first decade, Lawrence, located 40 miles from Kansas City, also had a children’s bookstore, travel bookstore, and general bookstore. Unlike the other three, the Raven survived the arrival of a Borders hypermarket in the late 1990s, largely by expanding its selection while raising awareness of the downsides of what Caine called “the malification of the downtown.” city ​​of Lawrence ”.

Today the Raven is a full-service general bookstore, and it has become an institution for both the townspeople of Lawrence and the local college community.

“Everything independent bookstores do well, the Raven was already doing under the previous owner and first owners,” said Caine, 34, who worked part-time in the store while at KU. “She was active in organizing events and building the community. I fell in love with the store and the business.

While honoring the origins of The Raven by maintaining a large mystery section, Caine injected new energy into the store. Despite the pandemic, it is on solid ground, with a “slight” increase in sales after switching last spring to online orders, curbside pickups and local deliveries; Holiday sales are up 7% from 2019. Business has been good enough that next spring the Raven will expand to 2,000 square feet. space — which is twice the size of its current space.

“There was a lot of motivation to move,” Caine said. “Right now it’s either about fulfilling orders on the website or having customers in the store. There is simply no room for both, and I do not anticipate the expedition will disappear even after we reopen to navigation. We needed a new setup where we could have people working on order fulfillment in a workspace separate from the sales floor.

Not only has the Raven shown how a brick and mortar store can weather a pandemic, but Caine has become a torchbearer in India’s public relations campaign against Amazon. His efforts began in April 2019, when he posted a series of tweets that went viral about Amazon’s impact on local economies. “Talking about Amazon has always been part of my thoughts on how to reach customers,” he explained. “While booksellers and other industry players talk well among us about Amazon, we struggle to educate consumers. The tweets that caught the eye were an attempt to explain this.

Caine compiled his tweets and an open letter he wrote to Amazon chief Jeff Bezos in a zine, How to resist Amazon and why, which The Raven and many other indies subsequently sold, or around 4,000 copies in total. Microcosm Press, which reissued the zine in November 2019 and sold another 10,000 copies, will release an expanded paperback edition in March.

“I only know what works for us,” Caine said. “And what works for us is to take a stand, a kind of militant bookseller. Our clients appreciate supporting a company that shares their values. What I’m saying about Amazon is what the original owners said in the newspaper about Borders. I am continuing their advocacy for small businesses. A bookstore, he added, is “particularly well suited” to be an activist business because it “can support certain titles or authors or presses who share your values.”

Stressing that indies cannot compete with Amazon in terms of price, convenience or shipping speed, Caine said he refused to fight an “uphill battle.” The Crow has a mantra, he said, “Yes you pay more, but you get a lot more: author events, community support, political activism, charitable donations. The book costs $ 5 more, but that’s what we’ll do with that $ 5. ”

Editor’s Note: This is the first in a series of interviews with booksellers about what’s going on in their stores. The interviews will appear twice a month throughout 2021.

A version of this article appeared in the 01/11/2021 issue of Editors Weekly under the title: Bookstore Spotlight: The Raven Book Store

The Berkeley Comic Bookstore aims to be your "go-to place"

The ephemeral bookstore returns to town