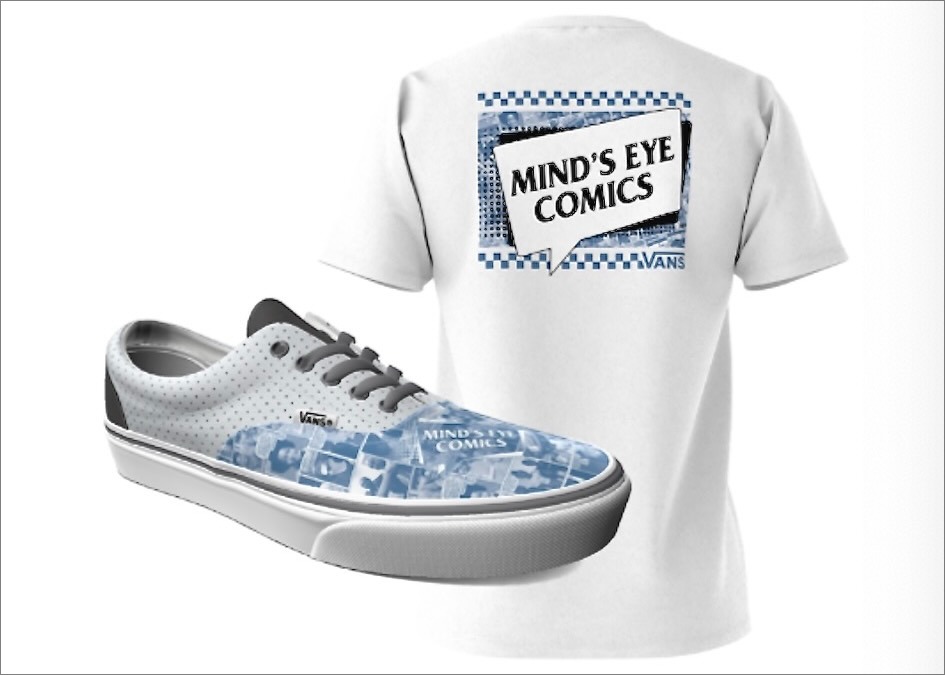 Mind’s Eye Comics has landed a limited edition product line as part of the Vans Company’s “Foot the Bill” initiative. The merchandise went on sale on February 17.

The initiative is selecting small businesses to design their own Vans shoes and t-shirts in an effort to support community businesses during the pandemic, according to the company’s website.

Eric Childs, the owner of Mind’s Eye Comics, said the opportunity had found him.

“This is a wonderful opportunity,” Childs said, adding that the pandemic shutdowns had taken a “heavy, heavy blow” on the business.

As part of this initiative, Vans produces up to 1,000 pairs of shoes and 250 t-shirts per partner, with all net profits going directly to the company.

Mind’s Eye Comics is currently joining a dozen companies with merchandise for sale as part of the initiative.

Harriet’s Bookshop in Philadelphia, Portrait Coffee in Atlanta, and 606 Records in Chicago are some of the other chosen companies. Earlier this year, First Avenue in Minneapolis landed a spot.

Childs, an artist, said the design was inspired by both this personal journey and the comics themselves.

“The pinhole leather on the quarter panels mirrors the halftone screen used in comic book printing,” he wrote in a description of the product. “The graphics on the tip are not only the mark, it is also the reflection of the panels of a comic strip. These panels are unique in that they capture my journey and allow the wearer to walk this journey with me.

The design also features images from her personal life, such as a photo of her parents and the original owners of the store.

Childs had been shopping at Mind’s Eye Comics’ original store in Eagan since it opened in 1998, and took over the business about three years ago and moved it to Burnsville.

A photo on the shoe features Damon Lindelof, the famous screenwriter and comic book author who created HBO’s Watchman series.

Lindelof reached out to Childs during the pandemic to lend his support to the brick-and-mortar comic book business.
“He said ‘Eric, Mind’s Eye has to stay wide open’,” Childs recalls.

The Vans initiative is the latest recognition of the store’s role in community culture.

Childs, who found comics thanks to his fourth-grade teacher, focuses much of his work on education.

He recently partnered with the Eastview High School Comic Club and hopes to encourage the formation of similar clubs in local schools.

Inside the store, Childs said the Vans initiative will help him secure the capital needed to hire new employees and continue to organize and develop headlines relevant to readers.

“It’s most definitely a huge community building platform,” Childs said. “Comic book shops – although you can buy (comics) at many outlets online – people still love to come to the store for that sense of community. “