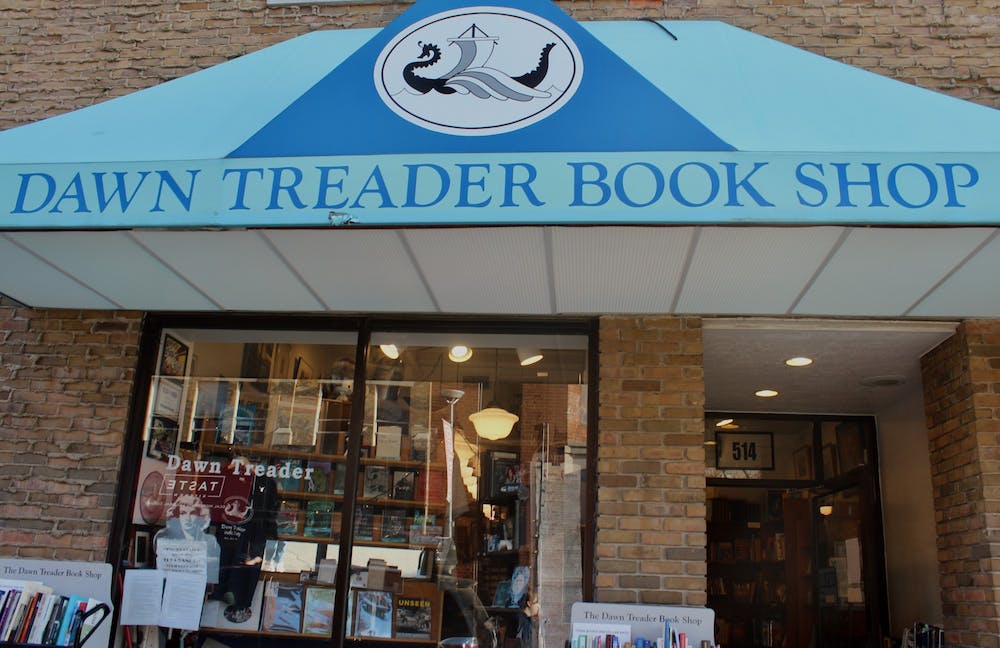 Depending on where you’re from, the words Dawn Treader can mean two things. Either you think of the fantastic ship of the narnia series where you think of the famous bookstore in Michigan. As much as I would love to sit down and talk about the intricacies of the boat, the bookstore is a much more interesting topic.

Founded in 1979 by Bill Gilmore, Dawn Treader Bookstore is one of Ann Arbor’s greatest cornerstones.

The experience begins before you even step inside. Outside the store, they place their carts of $1 books, which can hold junk or even treasure. The smell of paper that most book lovers know all too well seeps through the door.

Stepping into the Dawn Treader Library is like being in the past and the future at the same time. Simultaneously, you are surrounded by so much history and artifacts, complete with plenty of pop culture references hidden around the shelves and aisles.

Among the best “Easter Eggs” is the ever-lovely Patrick Stewart as Picard cut out of cardboard in the sci-fi section. Also, slightly surpassing it is the tomb of the life-size mummies which stands at the foot of an aisle. Small and large rooms like these make the Dawn Treader a fascinating place to explore and give it an unrivaled personality.

Now, you can’t talk about the enchanting atmosphere without mentioning the main attraction, the books. Dawn Treader buys and sells all types of used books and media. From old movie posters and maps to first printed editions of Catcher in the rye.

It is claimed that there are over 70,000 books inside covering virtually every genre. Each shelf is lined with a genre and is listed in alphabetical order. They range from basic fiction to myths, folklore and German history. One of the most interesting parts of the store is the first print showcase room. It’s a smaller area that looks more like a museum. Behind the glass doors of the bookshelves, there are several first edition books that can date back hundreds of years. As mentioned earlier, there is a copy of the first edition of Catcher in the rye from the 1950s. The Dawn Treader is a sanctuary for all of these stories and all of this history.

Unfortunately, like many businesses, COVID proved to be a big hurdle for the store. At the height of the pandemic, the store posted a GoFundMe to receive donations. This campaign helped them stay in business until the lockdown was lifted. Several independent bookstores have fallen victim to these circumstances. However, the community support shows that Dawn Treader has become its own landmark, a beloved place that regulars will continue to help thrive.

Many retail chains like Barnes and Nobles and big hitters like Amazon are at the top of book retailers. Due to the recent resurgence of independent bookstore fascination mixed with the legendary name the Dawn Treader has made for itself; it’s safe to say that this store will remain an Ann Arbor staple for years to come.