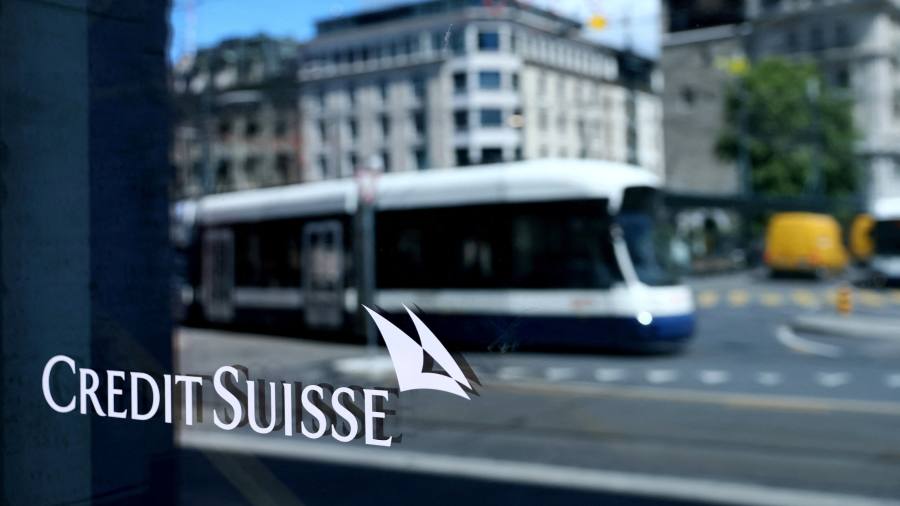 This article is an on-site version of our FirstFT newsletter. Sign up for our Asia, Europe/Africa or Americas edition to get it delivered straight to your inbox every weekday morning

Hello. Credit Suisse has drawn up plans to split its investment bank into three and resurrect a “bad bank” for risky assets, as the Swiss lender tries to emerge from three years of scandals.

Under proposals to the group’s board, Credit Suisse hopes to sell profitable units such as its securitized products business in a bid to avoid a damaging capital raise, according to people familiar with the plans.

Chairman Axel Lehmann appointed Ulrich Körner as chief executive in July with a mandate to carry out a sweeping overhaul of the bank, which has been hit by a corporate espionage scandal, investment fund shutdowns, a record loss of business and a litany of lawsuits in recent years.

The latest proposals would see the investment bank divided into three parts: the advisory business, which could be split later; a “bad bank” to hold high-risk assets that will be liquidated; and the rest of the company.

The board and management team plan to unveil the strategy – which is expected to include thousands of job cuts – with the bank’s third quarter results on October 27.

Thank you for reading FirstFT Europe/Africa. Here’s the rest of today’s news — Jennifer

1. Vladimir Putin mobilizes reserves for the war in Ukraine The Russian president yesterday ordered the mobilization of army reservists to support his struggling campaign in Ukraine and warned he would use the country’s nuclear arsenal if its “territorial integrity” was “threatened”. Western officials, however, ignored the nuclear bluff.

Thank you to everyone who participated in yesterday’s survey. Eighty-three percent of respondents said Russia should be forced to pay reparations for its war in Ukraine, while 12 percent said it shouldn’t.

2. Jay Powell refuses to rule out the US recession The Federal Reserve Chairman’s downbeat comment came after the central bank raised its benchmark interest rate by 0.75 percentage points for the third consecutive time, to a target range of 3% to 3.25% , and signaled that it would maintain a tight monetary policy to combat soaring inflation. .

“We need to put inflation behind us. I wish there was a painless way to do that” — Jay Powell

3. Liz Truss asks for an agreement on the NI protocol The British Prime Minister wants to resolve the post-Brexit row over Northern Ireland before the 25th anniversary of the Good Friday peace deal next Easter. Truss sought to calm tensions over the issue during a 75-minute meeting with US President Joe Biden in New York yesterday.

4. Somerset Capital for sale The boutique fund manager, which was co-founded by Business Secretary Jacob Rees-Mogg and manages around $5 billion, is eyeing a sale as chief executive Dominic Johnson prepares to step down ahead of a possible move into politics.

5. Seven dead in Iranian protests against the hijab At least seven people have been killed in protests across Iran, officials said, after thousands took to the streets in recent days angry at the death of a young woman arrested for allegedly breaking Islamic dress code.

BoE rate decision Traders are betting the Bank of England’s Monetary Policy Committee will act more aggressively than it did in August, when it raised interest rates by 0.5 percentage points to 1.75 %.

NHS Performance Plan Patients can expect to be offered a GP appointment within two weeks, with the most urgent seen on the same day, as part of a plan to boost England’s short-lived healthcare system money which will be unveiled by Thérèse Coffey, Secretary for Health and Social Affairs.

Economic indicators The European Commission releases flash data on consumer confidence in September, after hitting an 18-month low the previous month. The European Central Bank publishes its latest economic bulletin, while the US Department of Labor publishes weekly jobless claims, which have been falling for five weeks. (FT, WSJ)

The UN Security Council meets Diplomats prepare for a confrontation when the United States and Western powers denounce Russia for its invasion of Ukraine at the rally Moscow Foreign Minister Sergei Lavrov is expected to attend.

NASA asteroid protection mission The US space agency is holding a press conference on the world’s first test of technology for defending the Earth against the risks of asteroids or comets. It is due to hit its target asteroid, which poses no threat, on Monday.

FT Business Book of the Year The shortlist is out for the most compelling and enjoyable insight into modern business of the year, with £30,000 awarded to the winner and £10,000 to each runner-up. Check out the long list here.

What a far-right Italy means for Europe Polls suggest Sunday’s general election will result in a far-right government led by Giorgia Meloni of the relatively inexperienced Brothers of Italy. While the right-wing coalition leaders can be fierce eurosceptics, Rome and Brussels need a working relationship.

The UK’s gaping current account deficit With a growing gap between consumption and production, the pound can only maintain its value if foreigners want to lend to Britain or buy assets such as land, homes or businesses. But what if confidence drops?

Bitcoin cannot be separated from crypto Why do “bitcoin maximalists” claim that bitcoin is not a cryptocurrency? One can see why they might want to distance themselves from cryptoland scams. But their arguments do not hold water, writes Jemima Kelly.

Britain’s ‘Big Four’ supermarkets have a problem with Aldi It was to be different this time around, with Tesco, Sainsbury’s, Asda and Morrisons having learned the lessons of the financial crisis. This slowdown is supposed to be about price advantage, not profit. But discount rivals Aldi and Lidl are rising fast, writes Cat Rutter Pooley.

Irish youth look abroad The country’s emigration history has seen around 10 million people leave since 1800. While in the past many were driven out by famine and economic crises, young people are now being drawn to overseas jobs or the freedom to live in more open societies.

Lobster thermidor, Michelin-starred chefs and recipes with non-disclosure agreements: discover the test kitchens of the world’s most experimental airlines.