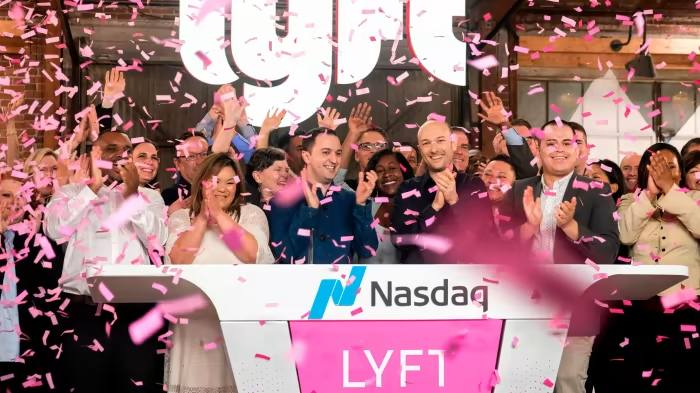 Hello. Three-quarters of major US companies that went public during the Covid-19 pandemic bull market are trading below their bid price, forcing some once-promising names back into private hands at sell-off valuations .

Of more than 400 listings where companies raised at least $100 million between 2019 and 2021, 76% are below IPO price, according to a Financial Times analysis of Dealogic data. The median return of the group of companies since their respective IPO dates is negative 44%.

Laggards include such high profile stocks as Robinhood Markets, Lyft and DoorDash, all of which went public during a market boom that ended in late 2021. The Nasdaq Composite Index, which contains many growth companies, dropped 32% this year.

With stock prices plummeting, private equity groups are aggressively circling new public companies as potential takeover targets, according to several Wall Street executives. And some boards have been receptive.

“When you think about the amount of private capital that’s been raised that hasn’t been deployed, and then look at how public equity valuations have been re-evaluated, it feels like it’s going to be a natural pairing,” David said. Bauer, who heads equity capital markets at KKR, the investment group known for its private equity business.

Thanks for reading FirstFT Americas. Here’s the rest of the news from the day — Gordon

1. ExxonMobil accuses Russia of “expropriation” The US oil supermajor says President Vladimir Putin’s government has “unilaterally terminated” its interest in the Sakhalin-1 oil and gas project in Russia’s Far East region and the field has been transferred to a national operator. The move increases the likelihood of a multibillion-dollar legal battle with the Kremlin.

3. EY’s U.S. partners flouted conflict of interest rules, regulator says A third of EY’s US audit partners have flouted its conflict of interest policies, the industry regulator said yesterday. Among lower-level executives, the rate of non-compliance with its financial disclosure rules was even higher, at nearly half, according to a report by the Public Company Accounting Oversight Board.

4. Hunt rips Truss’ economic policy Liz Truss has apologized for the economic chaos that followed last month’s ‘mini’ budget after UK Chancellor Jeremy Hunt scrapped two-thirds of the £45billion unfunded tax cuts proposed by his predecessor and warned of “extremely difficult” decisions ahead. The move reassured the markets but left the Prime Minister’s future hanging by a thread.

5. South Korea launches military drills with US as tensions rise with North South Korea yesterday embarked on a series of military exercises amid heightened tensions on the Korean peninsula. The annual drills will simulate a range of threats from North Korea, including the use of nuclear weapons, and will involve troops from all of South Korea’s armed forces as well as US soldiers.

Market outlook Stock markets extended their gains today as the UK’s U-turn on planned tax cuts boosted sentiment ahead of another round of corporate earnings on Wall Street. The expected gains in equity markets follow a strong rally in the previous session, with the S&P closing up 2.7% yesterday.

Bank earnings Goldman Sachs could officially announce plans for a major reorganization today as it reports third quarter results. According to analysts polled by Refinitiv, profits for Goldman, the last of the six largest U.S. banks to report, are expected to nearly halve, from $5.28 billion to $2.86 billion. Yesterday, Bank of America raised its outlook for annual earnings.

netflix Investors will be keen to get more details from the streaming giant on its prospects for subscriber growth and its new ad-supported tier. In April, Netflix reported a loss of subscribers for the first time in a decade, a trend that has continued into the past quarter.

Other income Healthcare firm Johnson & Johnson, investment manager State Street and advocacy group Lockheed Martin are reporting ahead of the opening bell today. After the closing bell, United Airlines is expected to report its strongest earnings since the start of the pandemic as strong demand for air travel continued into the fall.

Monetary Policy Atlanta Federal Reserve Chairman Raphael Bostic will discuss what awaits workers in an uncertain economy during a virtual panel hosted by Workrise. Separately, Minneapolis Fed President Neel Kashkari will speak on the economy during a panel before the Minnesota Chapter of Women Business Directors.

Inflation lessons from Latin America for the G7 Latin America was quick to raise interest rates, starting with Brazil in March 2021 – a year before the US Federal Reserve. Chile and Colombia were not far behind Brazil and Peru and Mexico followed. The tactic seems to be working, writes Latin America editor Michael Stott.

The fate of expatriate workers at KPMG Saudi Arabia For many Western expats, the prospect of working in well-paying positions at KPMG Saudi Arabia is exciting. But workers’ rights and the rule of law are still issues in the kingdom. The FT has reviewed the circumstances surrounding seven departures from the company since 2018. Many say they fear for their personal safety, particularly when negotiating the terms of their departures.

All the Emperor’s Men Our interactive story explores how Xi Jinping became China’s unrivaled leader – and how he plans to expand his power base. China’s most powerful leader since Mao Zedong, Xi has centralized decision-making in ways his recent predecessors could not have imagined.

Israeli work permits offer relief to Gaza’s ‘strained’ economy Thousands of people in Gaza, where unemployment is close to 50 percent, have applied for work permits in Israel over the past year. Israeli leaders, who have repeatedly made it clear that work permits are conditional on a calm security situation, last month increased the number from 1,500 to 17,000. For those lucky enough to get one, a permit can be life changing.

Sri Lankan author Shehan Karunatilaka has won the 2022 Booker Prize for his second genre-defying novel, The seven moons of Maali Almeida. Neil MacGregor, the art historian and chair of this year’s judges, described the book, set in 1990 during Sri Lanka’s civil war, as “a noir from beyond who dissolves borders not only of different genders, but of life and death, body and death”. spirit, east and west”.

Thanks for reading and don’t forget you can add FirstFT to myFT. You can also choose to receive a FirstFT push notification every morning on the app. Send your recommendations and feedback to [email protected]

The Climate Chart: Explained — Understand the most important climate data of the week. register here