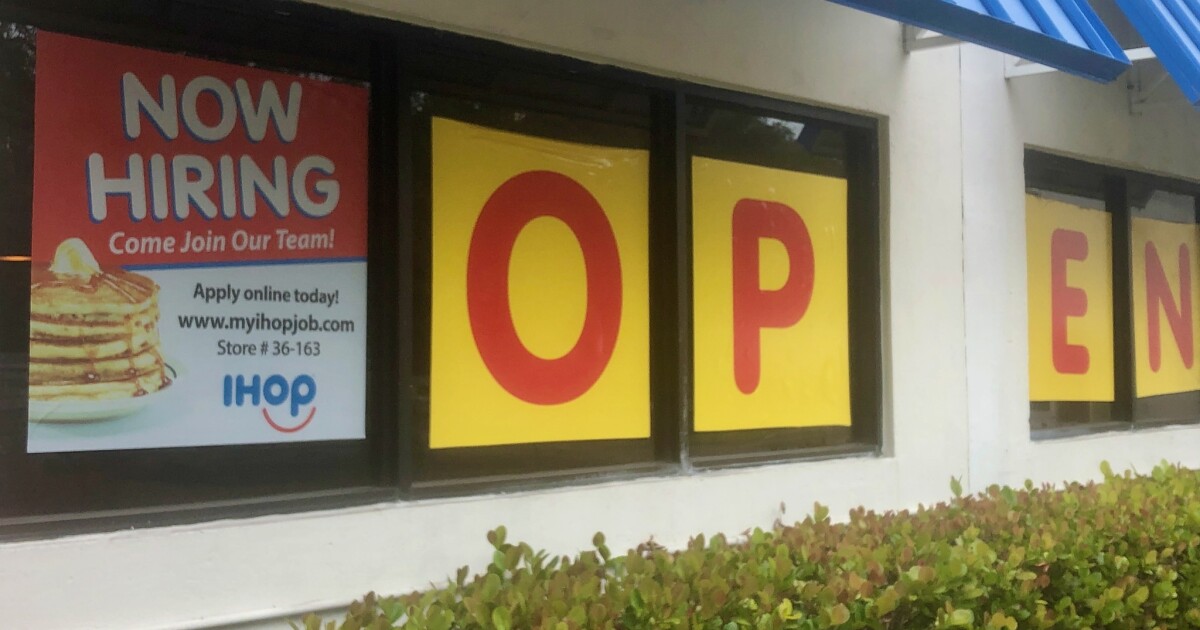 Florida’s unemployment rate fell to 3.2% in March as workers shun gigs at hotels, restaurants and entertainment venues for better-paying jobs in manufacturing, warehousing and logistics .

The Florida Department of Economic Opportunity released a report on Friday showing that the unemployment rate in March was down from 3.3% in February. The continued declines in the rate come despite employers reportedly struggling to retain workers.

“The combination (a) of a falling unemployment rate and a growing labor force is a very good sign for Florida’s economy,” said Adrienne Johnston, the department’s chief economist, during of a conference call with journalists. “It means that more Floridians continue to enter the workforce and are able to find work on a consistent basis.”

Johnston added that while people seem more optimistic about finding a job if they leave their current job, conversations among economists have returned to pre-pandemic talk of a “tight labor market”.

“We have these conversations that we had two or three years ago, where every business, every industry in our state is growing,” Johnston said. “They’re competing for qualified talent and they need to find ways to And that in some cases includes raising salaries, that means finding other ways to incentivize their employees.

The state also saw a shift in where people find work, with the professional services and business services sectors topping the list for job gains in the monthly report, while the leisure and hospitality experienced the largest decline.

The unemployment rate in March, down from 5.4% a year earlier, represented about 339,000 Floridians qualifying as unemployed out of a labor force of 10.51 million. From February to March, an additional 8,000 people found work in Florida, while the labor force grew by 42,000.

The state estimates that since then Florida has created 1.44 million jobs.

A press release from Governor Ron DeSantis’ office said last month marked the “biggest month of growth in manufacturing since May 2020.”

“Economic data underscores that Florida is outperforming the nation in protecting the freedom Floridians need to do business and drive economic success,” DeSantis said in a statement. “Industries like manufacturing continue to experience growth because Florida prioritizes developing the workforce and expanding opportunities for businesses and families in our state.”

The national unemployment rate in March was 3.6%, down from 3.8% in February.

The US Department of Labor reported Friday that Florida was among 37 states where the unemployment rate fell from February to March, with the rate remaining stable in the other 13 states and the District of Columbia.

“Over the past year, the unemployment rate has fallen in every state, and many states are at historic lows,” President Joe Biden said in a statement. “It’s not just numbers on a page: it’s millions of Americans back to work and able to support themselves and their families with well-paying jobs and enjoying the dignity that a job provides.”

Meanwhile, the National Federation of Independent Businesses reported dwindling optimism among business owners, largely due to inflation which the group said prompted nearly three-quarters of businesses to raise prices.

“Florida’s economy has held up remarkably well over the past two years, but we’re not immune to soaring inflation and other challenges facing small businesses across the country,” he said. NFIB-Florida Executive Director Bill Herrle said in a statement Tuesday.

Across Florida, the lowest unemployment rate in March was in Monroe County at 1.7%, followed by St. Johns County at 2.0% and Wakulla and Okaloosa counties at 2.1 %.

Highlands County had the highest rate at 3.9%, followed by Putnam County at 3.8% and Citrus and Hamilton counties at 3.7%.

Among major metropolitan areas, the Jacksonville and Tampa Bay areas were at 2.5%, down from 2.9% in February. The Pensacola area was at 2.6% after being at 3.0% in February.

The Miami-Fort Lauderdale-West Palm Beach metro area was at 2.8%, down from 3.0% in February. The Orlando-Kissimmee-Sanford area fell from 3.4% in February to 2.9% in March.

The state unemployment rate is seasonally adjusted, while the county and metropolitan rates are not.