Speaking on a conference call with analysts, Dan Sheehan, chief financial officer and chief investment officer, said LTC demands are more severe in 2022. The end of restrictions related to the COVID-19 pandemic has helped to a move away from home care towards more costly institutional care, he noted.

“Claims severity continued to increase in the current quarter as expected given the aging of the block,” Sheehan said. “Our new blocks of business, which are beginning to enter their claim years, have higher daily benefit amounts and inflation coverage than older LTC blocks.”

Payments related to a pair of class action settlements are also impacting the bottom line, Sheehan said. They are:

Settlement impacts will continue through 2023, Sheehan said. “However, based on our experience with the Choice 1 settlement [Skochin]we believe that overall the settlements are favorable to both policyholders and Genworth and will reduce our tail risk on our SLD block,” he said.

Genworth provided an overview of the approximately 999,000 SLD policies it continues to service:

The two largest blocks, Choice I and Choice II, make up “more than half” of Genworth’s total SLD policy portfolio, said President and CEO Tom McInerney. With the average age of Choice policyholders in the early to mid-70s, insurers are looking at another 10 to 12 years until the “peak years of claims” begin, he noted.

Genworth reported net income of $104 million in the third quarter. The Richmond, Virginia-based company said it earned 20 cents per share. Earnings, adjusted for one-time gains and costs, were 31 cents per share.

The financial services company posted revenue of $1.84 billion during the period. Its adjusted revenue was $1.91 billion.

The insurer received additional settlement news last month when a federal judge approved a $25 million settlement between Genworth and a group of more than 13,400 plaintiffs alleging that holders of the company’s Gold and Gold II universal life policies were subject to unlawful increases in cost of insurance (COI). 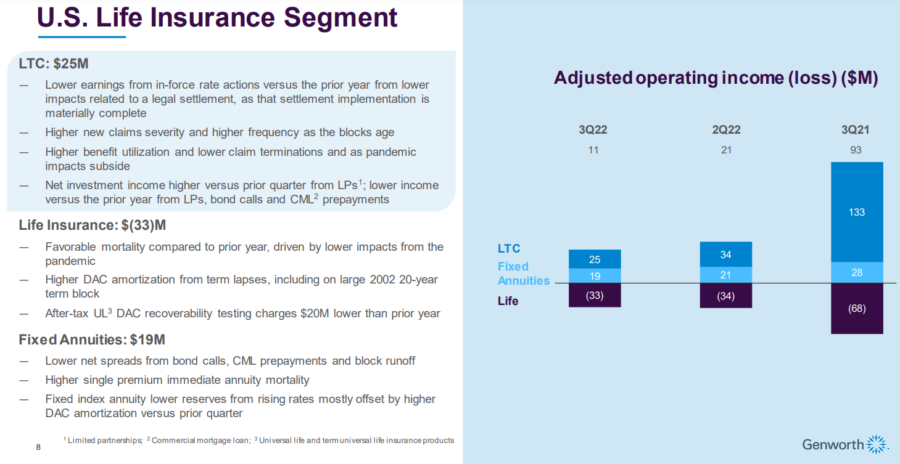 But it’s long-term care where Genworth has made the most waves. The insurer was a major force when LTC policies saw their highest sales in the early 2000s. Then lapse rates didn’t match assumptions, people lived longer, and more extensive care options evolved. , and interest rates fell to near zero. These factors caused Genworth to rush to regulators who needed rate hikes on its LTC books. It continues to seek rate hikes in many states today.

“In the first 9 months of 2022, we received in-force rate action approvals for LTC impacting $610 million in in-force annualized premiums with a weighted average increase of 33%,” Sheehan said. . “The resulting $200 million in incremental annual premium increases brings the total net present value of LTC rate actions achieved to $21 billion since 2012, up about $1.4 billion since the end of the year.” In addition to ongoing rate hikes, insurers are also offering reduced benefit (RBO) and non-forfeiture (NFO) options to policyholders. A non-lapse benefit is designed to ensure that if a policyholder resigns after a specified number of years, they retain certain policy benefits.

Genworth executives report an increase in policyholders opting for both options: 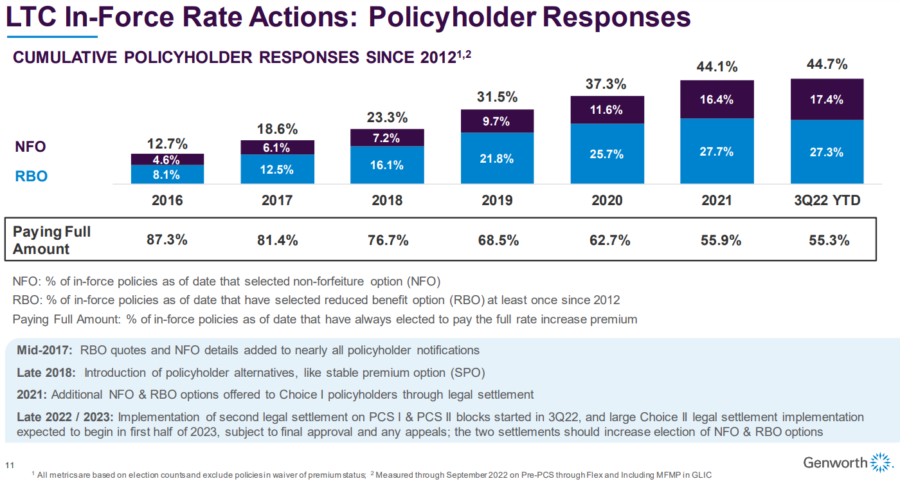 Health care inflation is another variable Genworth will face in the coming years, an analyst noted. U.S. healthcare spending is projected to grow 6.2% annually in nominal dollars through 2026, according to Health: United Statesa report recently published by Freedonia Focus Reports.

McInerney told analysts he was not particularly concerned about inflation, although Genworth is feeling some of its effects.

“When we look at inflation in particular, as with all of our assumptions, we are looking long term. We have obligations over the next 20, 30, 40, 50 years. So we have to look longer term.

“On top of that, there are offsets to inflation. So, for example, when inflation goes up, interest rates tend to go up, and it’s a good guide that compensates for the bad guide that accompanies inflation.

Editor-in-chief of InsuranceNewsNet, John Hilton has covered business and other beats in more than 20 years of daily journalism. John can be reached at [email protected]. Follow him on Twitter @INNJohnH.