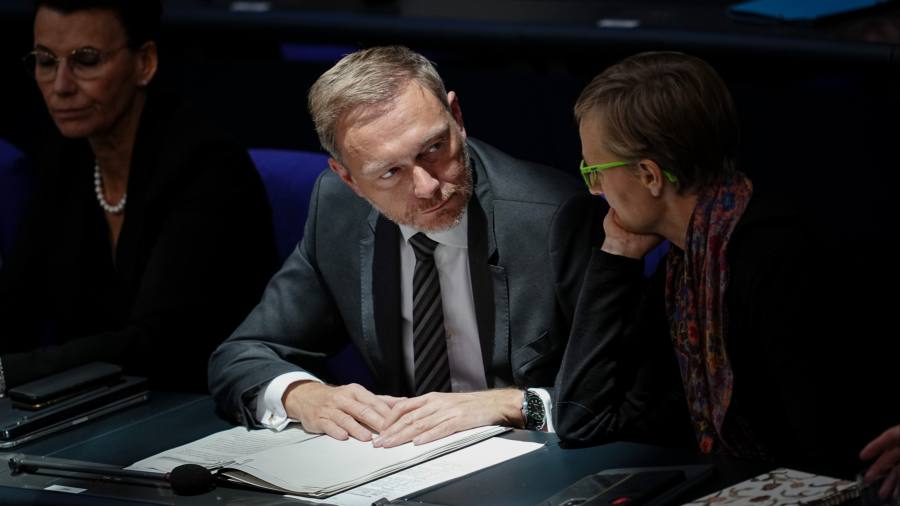 Germany’s finance minister rejected joint EU borrowing as a way to tackle the bloc’s energy crisis, saying it was cheaper for individual states to take themselves into debt given the rates of interest. higher interest faced by the European Commission.

“The financial advantage that the commission and many member states once hoped for from common European debt, as opposed to issuing debt on a national basis, no longer exists,” Christian Lindner said in an interview.

Its opposition to new rounds of borrowing will stoke tensions with other member states who believe Germany has done too little to forge a common response to an energy crisis that threatens to plunge the eurozone economy into a recession.

Berlin is already under fire for its unilateral €200 billion aid package aimed at easing energy costs for households and businesses. Earlier this month, Chancellor Olaf Scholz reluctantly agreed to push for an EU-wide gas price cap, but subject to heavy caveats and preconditions.

The energy crisis has sparked a new debate about the need for new joint borrowing after the unprecedented €800 billion debt-raising program that brought relief during the pandemic.

Ursula von der Leyen, chair of the commission, has in recent days stressed the need to fund ambitious new cross-border energy infrastructure projects as the EU tries to accelerate its transition away from Russian gas and boost renewables .

The IMF weighed in with a proposal last month for an EU “fiscal capacity” financed by common debt issuance and new revenue streams.

Still, northern EU countries remain skeptical, pointing out that the pandemic fund has always been seen as ad hoc. Lindner has made his strong opposition clear. “We shouldn’t bring up the idea of ​​more common borrowing by the EU on every occasion, every time we need more investment,” he said.

Brussels’ borrowing costs were among the lowest in the euro zone last year when it started issuing pandemic bonds. The EU sold a 10-year bond in June 2021 at a yield of 0.086%, while French and Belgian 10-year debt were trading at yields of 0.171% and 0.146% respectively.

The commission was recently forced to request a top-up to its 2023 budget plans given the rising cost of borrowing. It predicted the need for an additional €450m to cover the higher interest bill on EU borrowing next year, on top of a previously forecast cost of €1.03bn for 2023 .

Lindner said the EU would issue “a lot more debt” over the next few years for existing programs, so “it wouldn’t make sense to test how saturated the market is.”

In addition, the minister challenged the commission’s planned proposals for the reform of the EU’s fiscal rulebook, known as the Stability and Growth Pact.

The committee has been working on an overhaul that would allow member states to agree country-specific multi-annual plans to bring their debt burdens under control in conjunction with the EU. The proposal, due next month, would simplify the SGP regime and effectively give EU countries more leeway to devise their own routes to deleveraging – in return for stricter oversight by Brussels.

Lindner said: “It is not wise to have individual arrangements on the application of GSP rules which are negotiated on a bilateral basis.”

The credibility of the pact comes from the fact that “the rules must be applied by all, in the same way”, he added.

The minister said Germany was ready to accept “slower paths of adjustment” for heavily indebted countries as part of the fiscal compact reforms, but the focus should still be on “consistent reductions progressive deficit”.

Lindner leads the liberal FDP, a pro-business and fiscally hawkish party that rules Germany in an uneasy coalition with Scholz’s Social Democrats and the Greens.

The party has been hit by a string of recent election defeats and this month suffered the humiliation of being kicked out of the parliament in the northern state of Lower Saxony.

Lindner acknowledged that traditional FDP voters were unhappy with some of the Scholz government’s economic policies.

Some supported the idea of ​​mobilizing “massive economic aid in this crisis and deploying[ing] billions of euros to do so”. But others were appalled by Germany’s level of debt “and the interest the state has to pay on its debt is increasing because of inflation”.

That’s why he backed a return to Germany’s constitutional limit on new borrowing. This “debt brake” has been on hold since the pandemic and many on the left believe it should be dropped altogether.

“When your supporters are divided, the only answer . . . is to show leadership,” he said. “Part of that is insisting that Germany reinstate the debt brake next year. Otherwise the dam would break and we would end up funding everything with emergency loans.