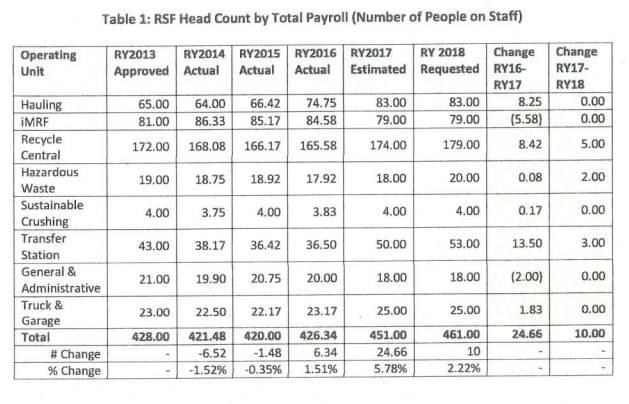 Michal Barba, who is a good journalist, announced the story first in the SFStandard: Recology may have overcharged the San Franciscans for even more than the $95 million the company had to repay as part of the ongoing City Hall scandal.

Other news outlets picked up the story, but no one explained exactly what happened here, and how Recology could be on the hook for a whole lot more money.

There are two major factors at play here, and both show the problem with a single company operating as a city charter-sanctioned monopoly with a perpetual no-tender contract – and lately, at the Department of Public Works, little or no supervision.

The way the current system works—and Sup. Aaron Peskin is trying to change that – Recology never has to submit a competitive bid. Instead, like PG&E, another government-sanctioned monopoly that has more than its share of problems, the city is expected to tightly regulate its rates.

So every few years, Recology submits a request for a rate hike. It goes to a city watch team who analyzes it, and in the end, the head of the PUC (for years, Mohammed Nuru) makes a final decision.

As part of this application, Reclogy (like PG&E) must submit a set of financial statements that demonstrate how much money the company needs. It’s more of a budget than an offer; Recology explains its costs and achieves a reasonable level of profit (you can see the numbers here) and the city approves the deal.

So if you take a look at exhibit 23 of the 2017 tariff file (the most recent), you can see an interesting trend. Recology in 2013 had permission to hire 428 people, but the following year the payroll was only 421. The following year it was 420.

It happens all the time in town; a department is allowed to operate with, say, a staff of 50, but people retire or quit, and it takes a few months to find and process a replacement, so at the end of the year there’s has an “attrition dividend,” money that was not spent on authorized hiring, and that money goes back into the general fund.

At Recology, this apparently just goes back into Recology’s profits.

For 2018, the company requested 461 people. I don’t know, as the company has so far refused to answer my question, how many workers there really are on the payroll, but I bet it’s less than 461.

That’s one of the things the city comptroller’s office is looking at. Peskin told me he was out of hard data, “but when the comptroller in San Francisco says he has concerns and is investigating, those are big words.”

Then there’s this piece of property that Recology sold to Amazon. It’s at the base of Potrero Hill, and the company no longer needs it. It’s a big piece of land, and at some point Recology wanted to fit it out for living. Instead of, Amazon bought it for $200 million and plans to turn it into a new distribution center.

Recology has owned it since 1971. Just before the sale, according to records from the appraiser’s office, it was appraised at approximately $3 million; under Prop 13, that means Recology paid a little less than that, probably around $2 million, 50 years ago.

So there’s a nice profit here, like almost $200 million.

Who receives this money?

Well, if the ratepayers paid for the property in 1971, that is, if the 1971 rate case included the money to pay for it, then one could certainly argue that the ratepayers deserve some of the profit.

Of course, in 1971, Recology did not exist; Sunset Scavenger and Golden Gate Scavenger were later combined into the holding company. It’s going to take some work to sort this all out.

But it’s one of the things the Comptroller’s Office is investigating.

So there is a lot of money here, potentially very big.