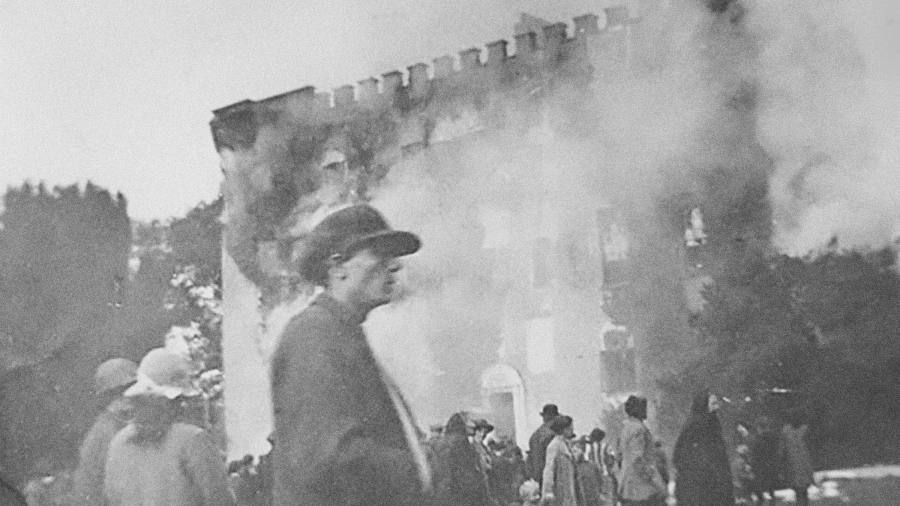 On June 22, 1922, Field Marshal Sir Henry Wilson MP was shot on the steps of his Belgravia home as he returned from the unveiling of a plaque to Great Eastern Railway employees who died in the Great War. A mob pursued his killers, two members of the Irish Republican Army, who were fought back by police in scenes of pandemonium.

This gripping episode opens great hate, a quick new account of Wilson’s murder by journalist Ronan McGreevy. One hundred years later, this murder is one of many commemorated in the centenary of the Irish Civil War. It remains to be seen how this will play out, with the uneasy coalition government of parties emerging from the Civil War divide, the rise of Sinn Féin and continued Anglo-Irish tensions over the Northern Ireland protocol. . “Shared history”, the watchword of the recent “Centenarian Decade”, will be difficult in this context.

The third British MP to be assassinated, Wilson had a checkered and distinguished military career which saw him rise from rejection at Sandhurst to Chief of the Imperial General Staff. Although he was active globally, Ireland remained a touchstone for Wilson, who was born into Anglo-Irish gentry in Longford with strong Ulster roots. Losing Ireland meant losing the empire, Wilson feared. (Turns out he wasn’t entirely wrong.)

Prior to World War I, Wilson worked to block Ireland’s internal regime. After the war, as the cabinet’s senior military adviser, he pushed for drastic measures to be taken to deal with the IRA’s “murderous gang”. Prime Minister Lloyd George’s eventual settlement with Sinn Féin through the Anglo-Irish Treaty of 1921 was therefore a grave disappointment. Wilson retired from military life in February 1922 and was re-elected Ulster Unionist MP for North Down two days later. As a military adviser to the government of Northern Ireland, he called on Britain to reconquer Ireland and was associated with the Special Powers Act, a brutal attack on the civil liberties of northern nationalists.

All of this made Wilson a figure of hatred for the new Irish Free State and its anti-Treaty opponents – a “violent Orange supporters” in the words of Irish Republican commander Michael Collins. Although McGreevy doesn’t quite provide irrefutable proof of the long-debated question of whether Collins ordered Wilson’s murder, he does trace the history of the IRA’s attempts to assassinate members of the British Cabinet, which that helps make sense of the roots of this sensational. offensive.

Wilson’s killers were quickly apprehended and identified as Reginald Dunne and Joseph O’Sullivan, both born in England to parents of Irish descent. One of McGreevy’s strengths is bringing more light to these men: Born into upwardly mobile immigrant families, both were privately educated and had family ties to the British military. In particular, Dunne, who served in the Irish Guards, comes across as a complex character. Prior to the assassination, he was given white feathers – symbols of cowardice – by anti-treaty women suspicious of his ties to Collins and the Free State government. At a heated meeting in a Holborn pub on June 21, Dunne said he would “do something”. Was that the trigger for the decision to assassinate Wilson the next day? McGreevy keeps us guessing.

Two days after Wilson’s state funeral, the Free State government (under pressure from London and with artillery provided by the British) opened fire on Republicans occupying buildings in central Dublin. The Irish Civil War had begun.

Dunne and O’Sullivan were hanged in August 1922. Within hours Wilson’s ancestral home, Currygrane House, was burnt down by the IRA. It was just one of almost 300 country houses destroyed by arson during the Irish Revolution. The “great houses” of the Anglo-Irish landed gentry, largely Protestant, provided work for the local population and were often of architectural significance. But they were also physical symbols of a history of colonization and expropriation of the lands of the Catholic masses who made up the farmhouse. During the Revolutionary War, British forces were often quartered in large houses. Their vicious retaliatory campaign against local people across Ireland is another factor in why so many great houses were destroyed from 1920 to 1923.

Some of the great houses have been razed to the ground, leaving only ghostly grassy footprints whispering of a world and way of life erased by conflict

In Burn down the big house, Terence Dooley, Professor of History at Maynooth University, draws on decades of research to weave social, political and cultural history into a gripping portrait of a landscape and social milieu forever changed . As he shows, there was no top-down IRA strategy to eradicate the Big Houses; on the contrary, the attacks were piecemeal, launched from below and implemented locally. They can only be understood by paying attention to decades of local grievances and the accumulated tension of everyday social dynamics.

The conventional explanation for the relative conservatism of the Irish Revolution is that social revolution preceded political revolution, with the Land Wars of the 1880s prompting a series of laws allowing extensive transfer of property from landlord to tenant. Although this simplistic account has been challenged by historian Fergus Campbell and others, Dooley’s feat is to demonstrate the extent of land hunger as a mobilizing factor during the revolution. The fires were “as symptomatic of the persistence of the land question as [they were] of the continued loyalty of the aristocracy”.

Striking details are found on almost every page: paraffin-soaked furniture piled up on the lawn outside Moydrum Castle; a (possibly apocryphal) Rembrandt used as a dart board at Mitchelstown Castle; the stench of urine after IRA forces used the living room walls of the same house as latrines. ‘All bedding, mattresses, carpets, sofas etc. will have to go to Dublin to be thoroughly sanitized,’ was DH Doyne’s verdict after St Austin’s, his French Gothic country house in Tullow, was occupied by IRA men.

Despite major compensation programs, most of these houses have not been rebuilt. Families moved, usually to England, and state lands were broken up and sold. Dooley’s empathy is abundant: for the Anglo-Irish families whose world has vanished, for the houses and their contents, strewn about – or, more likely, looted or “acquired” by Dublin antique dealers – and for the tenants, driven by the thirst for land.

A few ruins of large houses dot the landscape in Ireland, forming as Dooley puts it, “icons of revolutionary mythology”. Moydrum Castle was immortalized on the cover of U2 The unforgettable fire album. Others have been razed, materials removed for building projects elsewhere, leaving only ghostly grassy footprints whispering of a world and way of life erased by conflict.

These two books are tangentially linked by the destruction of Henry Wilson’s family home at Currygrane House, but they are also linked on a deeper level. Both McGreevy and Dooley deal with the complex and tangled layers of national, religious and cultural identity that have been crushed by the obliterating certainties of revolution. Like the London-born ex-IRA Volunteer soldiers who killed Wilson, the Irish Revolution forced the inhabitants of the great houses to choose sides. As the British Empire fractured, new frontiers were created in the souls of men as well as on the new map of the United Kingdom. Some, like Wilson, Dunne and O’Sullivan, chose voluntarily; others, like the inhabitants of large houses, were forced at gunpoint or the heat of flames.

Burn down the big house: The story of the Irish country house in times of war and revolution by Terence Dooley Yale £25, 368 pages