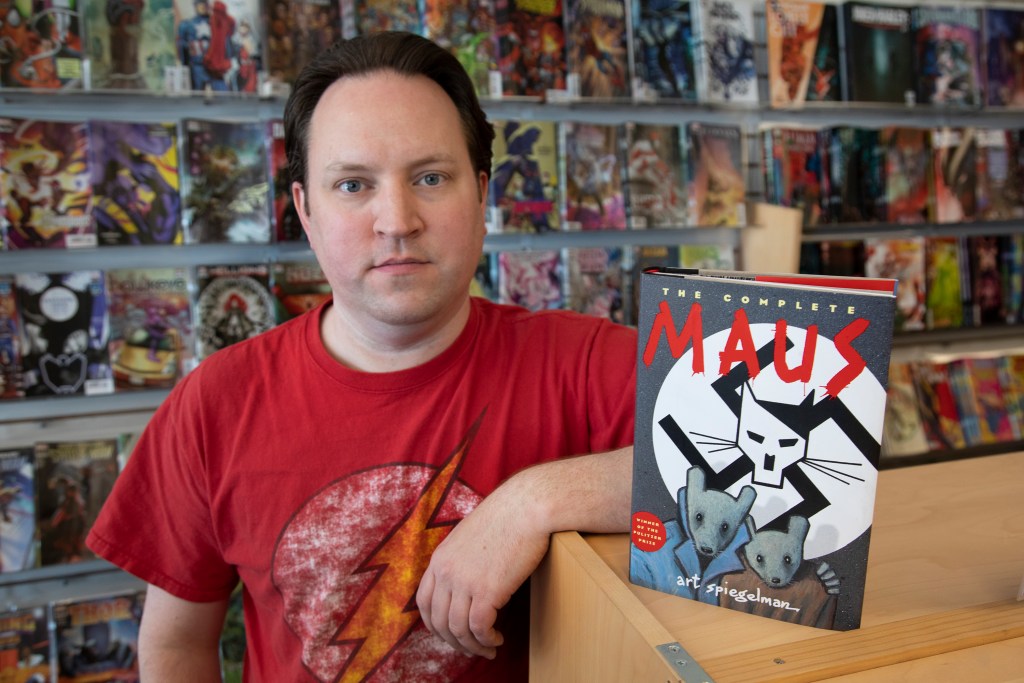 Ryan Higgins usually leaves the heroics to the costumed crusaders found in the books he stocks at his Comics Conspiracy shop in Sunnyvale.

But the comic book store owner isn’t content to stay away when it comes to groups trying to ban books, graphic novels and other reading media. Instead, he’s joining the fight – most recently in response to Tennessee’s McMinn County School Board’s decision last month to ban Art Spiegelman’s award-winning Holocaust graphic novel “Maus.” , to be used in college classes.

“As I have already offered with other banned comics, I will be donating up to 100 copies of ‘The Complete Maus’ to any family in the Mcminn County area of ​​Tennessee,” Higgins said. on Twitter. “Just DM me your address!”

As I have offered before with other banned comics, I will be donating up to 100 copies of The Complete Maus to any family in the Mcminn County area of ​​Tennessee. Just DM me your address! pic.twitter.com/ptmdjmwYE5

It also sparked interest from readers – not all of whom were looking to get the book for free.

“We had hundreds and hundreds of people contacting us and wanting to buy the book,” Higgins says.

Others were looking to donate to the cause.

“Several people wanted to purchase additional copies to add to our donation number,” says Higgins. “We mostly turned them down. We recommended people support their local library.

Although members of the McMinn County School Board objected to the use of nudity and profanity – and therefore unanimously decided to ban the use of the novel – “Maus” is widely considered a literary masterpiece.

The highly acclaimed graphic novel is a collection of serialized works by writer-artist Spiegelman from 1980-1991 dealing with his Jewish father’s experience in the Holocaust.

In 1992, “Maus” became the first – and still the only – graphic novel to win a Pulitzer Prize.

Among the calls for support, Higgins says he has received phone calls from “80-year-old Jewish women whose parents or loved ones survived or died during the Holocaust.” He says they will cry to him on the phone, filled with grief and saying “how they can’t believe this is going on”.

“They’ve never read a comic before, and they ordered me this book to read,” he says. “It’s just unreal. I don’t have the words for the people who have contacted me about this. It was quite a moving experience.

Higgins first read “Maus” as a teenager, and he still tries to keep it stocked at Comics Conspiracy.

“We always have to have it in the store,” he says. “It’s one of those books. It doesn’t matter if it’s been a year between copy sales, we’ll still carry it.

Yet keeping it in stock today is a difficult task, because banning a work of art – as is often the case – has only increased people’s desire for it. Following the decision of the school board, “Maus” is now a commercial success. It hit the top of Amazon’s bestseller list immediately after the Jan. 10 ruling. Nearly a month later, it’s still No. 11 on Amazon and No. 3 on the Indie Bestseller list, which tracks book sales at independent bookstores.

“Everyone is sold. Amazon was out of stock,” says Higgins. “Our distributor, Penguin Random House, said, ‘We are seeing unprecedented activity on this book.'”

Higgins has just received its first big order of “Maus” and plans to ship the first 50 copies to readers this week.

“Hopefully by the end of the month we will have received and shipped all the copies,” he says. “That’s my goal.”

This isn’t the first time Higgins has fought back against attempts to ban graphic novels. He made a similar offer on Twitter after a Texas school district removed the use of two other popular offers last year.

“I will send a copy of ‘V For Vendetta’ or ‘Y The Last Man Volume 1’ to any kid in the district who wants one,” Higgins tweeted.

I will send a copy of V For Vendetta or Y The Last Man Volume 1 to any kid in the district who wants one. https://t.co/REkcv0XkwV

Higgins says both graphic novels had “adult content in there” but were “pretty politically strong titles as well.”

“With the other books that were banned (by the school district), it was clear that it was somehow more malicious than just, ‘Oh, we’re just going to delete that,'” he says.

Singapore prison assault rate on the rise since 2019