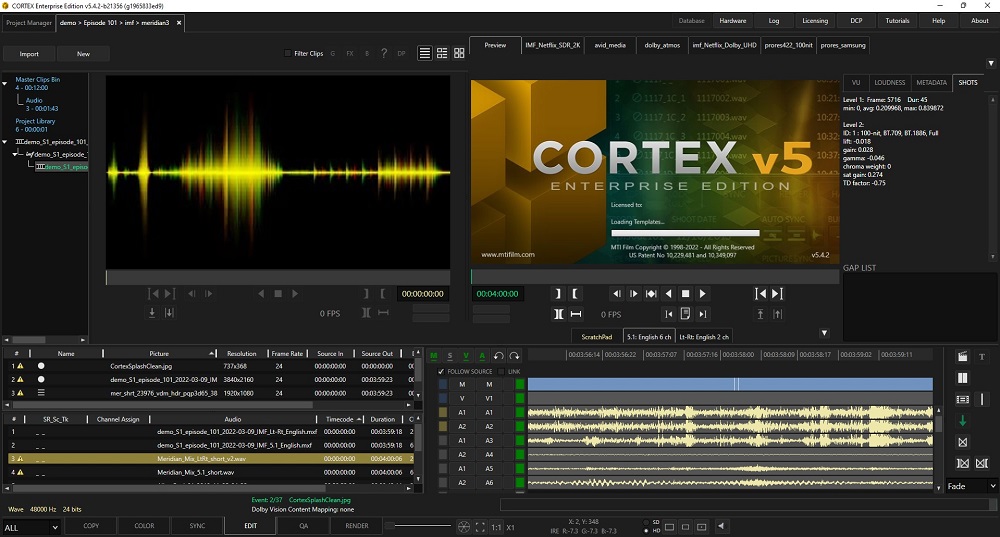 MTI Film has continuously improved and added new features to its core products, Cortex and DRSâ„¢Nova, to simplify the management of content from set to screen and make restoring film and television content faster. and less expensive. Its research and design team is constantly developing new tools, often inspired by customer feedback or its own post-production experience.

The company’s latest innovation for Cortex Enterprise is a frame rate conversion tool. Scheduled for release this month, the tool uses cutting-edge AI-assisted machine vision technology to automate the process of converting content to a different frame rate while avoiding artifacts caused by camera movement. â€œIt’s a common task to convert media frame rates, say from 30 fps to 24,â€ says Larry Chernoff, CEO of MTI Film, â€œbut you run into issues with shots that include lateral motion. If you just delete every fifth frame, you get a skipping effect.

MTI Film began looking for a solution to this problem when remastering a 1990s television series. The show’s source material included a mix of original 30 and 24 fps camera negatives that needed to be aligned. The post team first tried to drop every fifth frame of 30fps media, but the camera movement resulted in too many jumps and other artifacts. They then tried an existing automation tool that used AI to identify images that could be safely discarded, but it produced too many errors and was too slow. “It took 40 hours to process a 46-minute episode,” Chernoff recalled, “not including the time it took in an editing bay to fix artifacts, especially those that occurred with every cut.”

So MTI Film set out to create its own solution. He used open-source AI machine vision software, originally developed at Peking University, which essentially reconstructed images through interpolation. This solution was successful in creating high quality image interpolation, but it still produced artifacts with every cut and required a lot of processing time. MTI Film solved this limitation with distributed processing. â€œUsing an EDL, we analyzed and distributed over 700 shots across ten machines and retrieved them in real time,â€ Chernoff explains. â€œAs part of the tool, we also created an algorithm that accounted for the time of each shot, thereby maintaining synchronization and producing clean cuts. After that, all that was left was quality control and replacing the few frames that needed extra attention. Â»

MTI Film has developed this solution into a general tool for performing frame rate conversions (to and from any speed) with minimal errors. It makes this tool generally available by packaging it with Cortex Enterprise. “There’s a lot of content that started life at 30 fps but now has to be 24 fps,” says Chernoff. “It used to be just too long and error-prone, but this tool makes it convenient.”

In version 5 of DRSâ„¢Nova, MTI Film introduced Camera Motion Analysis, which divides clips into three types of motion: static, down, and up. Users can then discretely assign unique values â€‹â€‹to each move
segment, globally, or segment by segment in a plan. The new version also includes the ability to virtually change the start point of a clip’s timecode and change the frame rate of a clip. Last year, the company launched Shine, a utility for DRSâ„¢Nova that automates the filtering out of dirt and temporary scratches, cutting the time needed for these repairs by more than half. More recently, he added an alpha filter to Shine to replace the dirt and scratches found in the IR board.

â€œWe’ve added many new features to DRSâ„¢Nova to automate common recovery tasks,â€ says Chernoff. â€œNot only do they eliminate a lot of tedious and repetitive work, but they also significantly reduce overall restoration costs. As a result, it is now possible to restore a large amount of content that was previously prohibitively expensive.

About MTI Film LLC
MTI Film is a leading provider of software and services for the entertainment industry. Its software division provides revolutionary tools for critical post-production processes. They include the CORTEX product family, which offers comprehensive solutions for dailies processing, media management, deliverables and more, and DRSâ„¢ NOVA, the industry standard for digital film restoration.

The new ESG realpolitik and the bonanza of fossil fuels

No, Intel's XeSS GPU Frame Rate Booster Is Not About To Launch