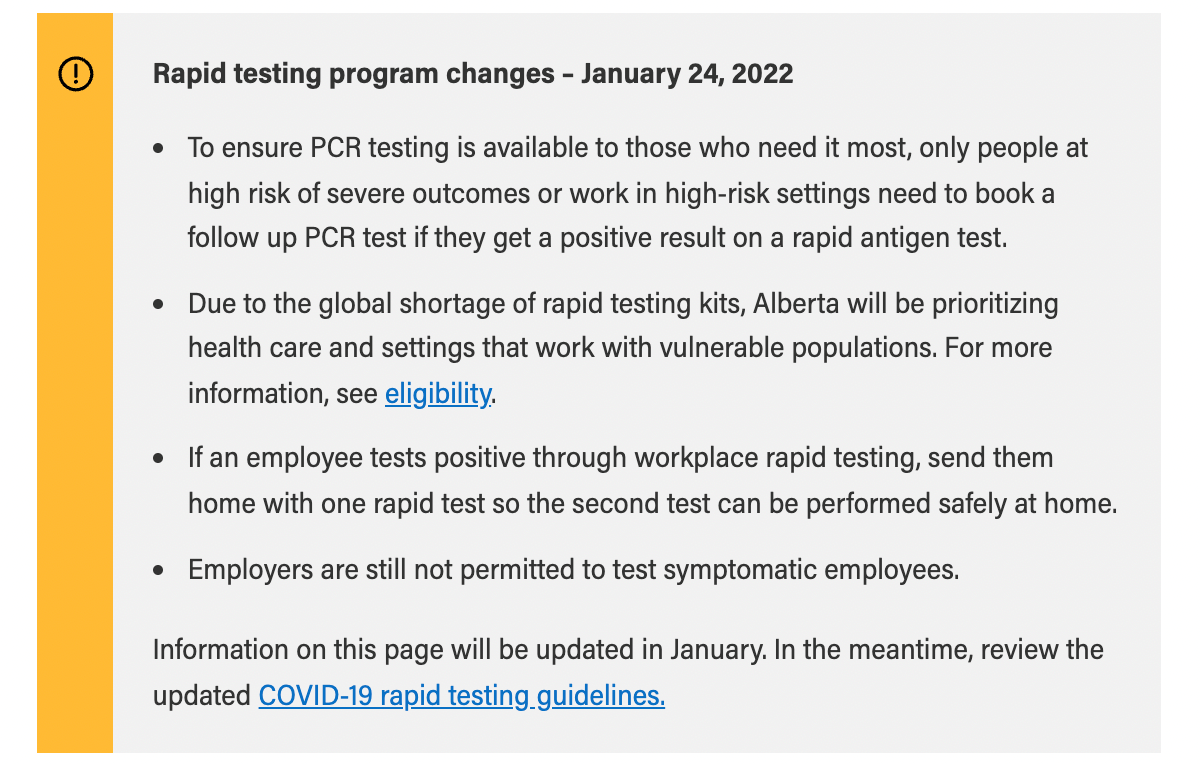 With a growing reliance on rapid testing in Alberta, companies that have signed up for the province’s rapid testing program are unsure when they will receive their next allocation of test kits.

BONNYVILLE — Since early spring, Alberta Chambers of Commerce have been providing businesses that have signed up for a rapid testing program with enough kits to test every asymptomatic employee up to twice a week.

The program is unofficially suspended due to the lack of rapid tests provided to Alberta Chambers of Commerce by Alberta Health.

The program has been extremely beneficial to local businesses in preventing workplace outbreaks and giving peace of mind to business owners and their employees, says Serina Parsons, executive director of the Bonnyville Chamber of Commerce and of the district.

However, two weeks ago, around the time Alberta students returned to school after winter break, pre-ordered COVID-19 rapid test kits stopped arriving at the House. of Commerce of Bonnyville.

“(Alberta Health) does not send us a standard number of tests. We are asking for the tests because we need them based on the number of people enrolled in the program, ”explains Parsons. “We received our last delivery a while ago.”

Now, some of the more than 50 companies that have signed up for the scheme need their next allocation of rapid kits – but are finding there are none available through the Chamber.

“We certainly ordered these early as well, but we ordered them just as AHS (Alberta Health Services) was transitioning from more frequent PCR testing to limiting who was eligible for PCR testing,” Parsons says.

Since the beginning of January, schools in Alberta have also been receiving rapid test kits from the province to detect the virus in students and staff.

“Our direct correspondence with (Alberta Health) basically all they’re saying is that when eligible but non-priority settings are receiving testing is currently unknown and may result in long wait times,” Parsons says. , referring to information received from the provincial health organization.

According to a statement released by the province on Jan. 24, the changes to the program are “due to the global shortage of rapid test kits.” Therefore, “Alberta will prioritize health care and settings that work with vulnerable populations.”

“Supply permitting and requests for these priority settings have been met,” the other four eligible groups will then receive rapid tests, according to the Alberta government’s website.

“These changes to the workplace rapid test program do not affect the distribution of rapid test kits to pharmacies or K-12 schools,” the provincial website says.

Parsons says there is some frustration among business owners who no longer have access to the quick kits they signed up for.

Since the program was first launched by the province, chambers of commerce have acted as the distribution center for the rapid tests and have been responsible for fulfilling contracts with participating companies and reporting anonymous results data. provincial testing.

“So we can’t do anything without getting them from Alberta Health,” Parsons says. “I fully understand the backlog and prioritization of rapid tests and where they are going. However, my frustration from the point of view of the Chamber, which has been part of this program for a year, is that we have commitments and contracts with these companies. »

Parsons says that while she understands the province is unable to meet its part of the commitment at this time, the shift to the use of rapid tests is of mild concern from the House’s perspective.

Only Albertans who fall into the categories of people at risk of severe illness or who work in high-risk environments and who have symptoms are currently eligible for a PCR test. This includes children under the age of two with symptoms, pregnant women with symptoms, and people with symptoms who live or work in remote First Nations, Inuit and Métis communities, among others.

“To ensure the PCR test is available to those who need it most, only people at high risk of severe results or working in high-risk environments should book a follow-up PCR test if they test positive. on a rapid antigen test,” according to the province.

The biggest problem Parsons sees is a lack of planning before moving to a greater reliance on rapid tests.

“They have limited their PCR testing and their access to PCR testing and now rely heavily on rapid testing. However, if we cannot provide rapid tests to businesses and schools as they demand more confidence…supply and need have missed the deadline when they changed their Politics.

She notes that all the rapid tests come out of the same warehouse. “Rapid tests for schools, rapid tests that are sent to AHS facilities for distribution to the public, as well as the commercial program, which is the one we are a part of.”

And while companies participating in the rapid screening program are high on the priority list, Parsons says they are not at the top. So there are still several unknowns as to when the program will see a return to the normal distribution of antigen testing kits.

The majority of companies participating in the COVID screening program do so as a preventative measure to stop the spread of the virus – but not all.

Some companies participating in the program provide contracted services to other companies that require service providers to test negative before entering a job site.

“Now we’re not able to provide those rapid tests that they used to make sure they could get into those facilities. So that may affect some of their operations,” Parsons says. “What if we don’t don’t get (rapid tests), there aren’t a lot of places that are.”

Parsons says companies offering private rapid tests will likely see a large influx of people who need them due to the growing difficulty of getting tests elsewhere.

“I just hope that with supply chain challenges and all that, supply will soon meet demand – but that doesn’t seem to be the case at the moment,” Parsons says.

Final chapter for The Old Book Store in Northampton