A handwritten manuscript of Dante Alighieri, author of the Divine Comedy, the Italian “national poet” and father of modern Italian, has been discovered by a nun.

Dante was born in Florence in 1265 and was instrumental in establishing Italian literature, but no one has seen his writing for centuries.

The new discovery was discovered by a Florence-based researcher turned nun, who claims to have stumbled upon the work hidden in two libraries, according to a Times report.

They date from his time when he was a student in Florence, when he was copying works on government art, and have been found both in Florence and in the Vatican.

Julia Bolton Holloway taught medieval studies at Princeton University in New Jersey, before becoming a nun and running the English Cemetery in Florence.

She said the writing was “schoolboy style” but in excellent Tuscan, which provided the model for the Italian and covers the ideas that appear in Divine Comedy.

The new discovery was discovered by a Florence-based researcher turned nun, who claims to have stumbled upon the work hidden in two libraries.

WHO WAS DANTE ALIGHIERI?

Dante Alighieri was born around 1265 in the Republic of Florence and is considered the Italian national poet.

His Divine Comedy is considered one of the most important poems of the Middle Ages and the greatest literary work in the Italian language.

He established the use of the vernacular, rather than Latin, in literature, making it accessible to a wider group of readers.

He wrote in the Tuscan dialect which was the model for modern Italian.

He is said to have influenced English writers like Chaucer, Milton, and Tennyson and was the first to use the three-line nested rhyme scheme.

He was assisted on his deathbed by his three children, friends and admirers he had in the city.

Bolton Holloway, a British-born researcher who spent time as a hermit in Tuscany after becoming a nun, says the writing “gives insight into his genius.”

The writings also provide insight into his masterpiece, The Divine Comedy, including ideas for ethical government that will appear later in the book.

The Divine Comedy was completed in 1320, a year before Dante’s death, and is an imaginative vision of the afterlife that was representative of the Western Church.

It explores the state of the soul after death, presenting an image of divine justice as Dante travels through hell, purgatory, and heaven.

The Divine Comedy is studied to this day by all Italian schoolchildren and has been studied by scholars of Italian literature, history and religion for centuries.

‘Writing [in the newly found manuscript] looks like a schoolboy in early manuscripts, but the handwriting is excellent Tuscan, ”Bolton Holloway said.

They date from between the 1280s and 1290s when Dante was a pupil of Brunetto Latino, philosopher, scholar, lawyer, politician and statesman of the 13th century.

Bolton Holloway has studied Latin, also known as Latini or Latinus for five decades, and says he appears in Divine Comedy in a section of Hell reserved for sodomites.

“Dante reports that Latino was his old teacher, but he really tarred and feathered him in his work and as a result he got overlooked. Maybe it took a woman to take care of him, ”she said.

Latino was Dante’s guardian after his father’s death, and it is believed that there was an intellectual and affectionate bond between the old man and the young poet.

In fact, a number of characters from Dante’s Hell, the first part of the Divine Comedy, are also mentioned in Latin documents written in Italian.

It appears from new notes discovered by Bolton Holloway that some of these documents may have been written or copied by Dante himself.

She discovered the works while researching manuscripts that had been written by Latino students, finding one “most likely the work of Dante.” 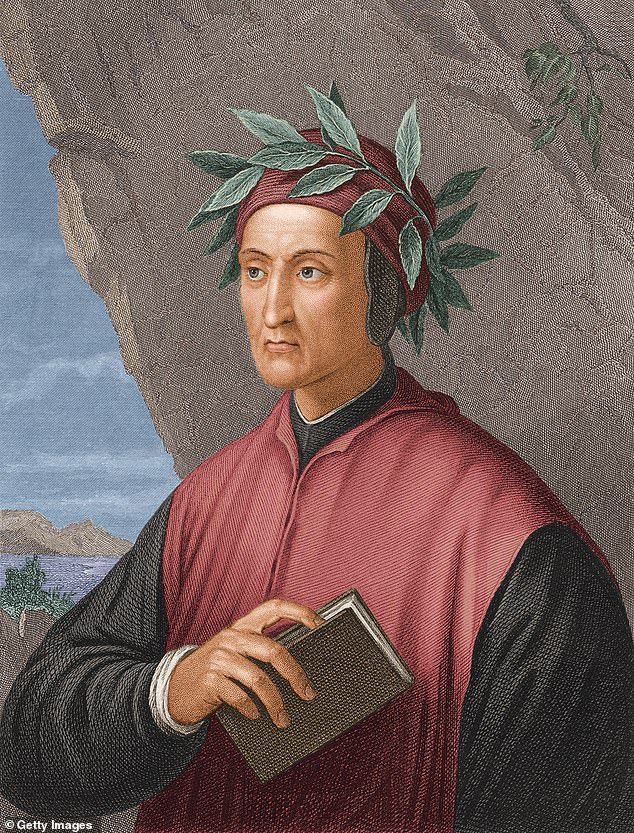 A handwritten manuscript of Dante Alighieri, author of the Divine Comedy (depicted in this posthumous 14th century portrait), the Italian “national poet” and father of modern Italian, has been discovered by a nun

“These are the only writings in the so-called ‘cancelresca’ script, which Dante probably learned from his father and are the only ones on cheap parchment, which makes sense given that Dante was poorer than his comrades,” a- she declared.

“No copy of Dante’s own manuscript version of the Comedy has been found, but Leonardo Bruni, a Renaissance scholar who saw Dante’s handwriting described it as being similar to the manuscripts I found. . “

Two of the manuscripts she found present a deign of a square imposed on a circle. It is a concept used by Dante in the Divine Comedy to describe God.

“The Latino was steeped in the classics and, during a period of exile in Spain, learned astronomy and Aristotle’s work on ethics, which all fuel comedy,” Bolton Holloway said.

“He would dictate his work on ethics, rhetoric and politics to his students upon his return to Florence. So many of his words appear in comedy – he and Dante had the same spirit, ”she said.

WHAT DO THE CATHOLICS IN THE LIMBO THINK?

Limbo comes from the Latin word meaning border or edge.

It was considered by medieval theologians to be a state or place reserved for the unbaptized dead.

This includes the good people who lived before the coming of Christ.

In the Divine Comedy, Dante placed the virtuous pagans and the great classical philosophers, including Plato and Socrates, in limbo.

Centuries of tradition and teaching have held that babies who die without baptism go into limbo.

The official catechism of the Catholic Church, published in 1992 after decades of work, dropped the mention of limbo.

In 2007, the Church effectively buried the concept of limbo when the Church’s International Theological Commission declared that limbo reflected an “unduly restrictive view of salvation.”