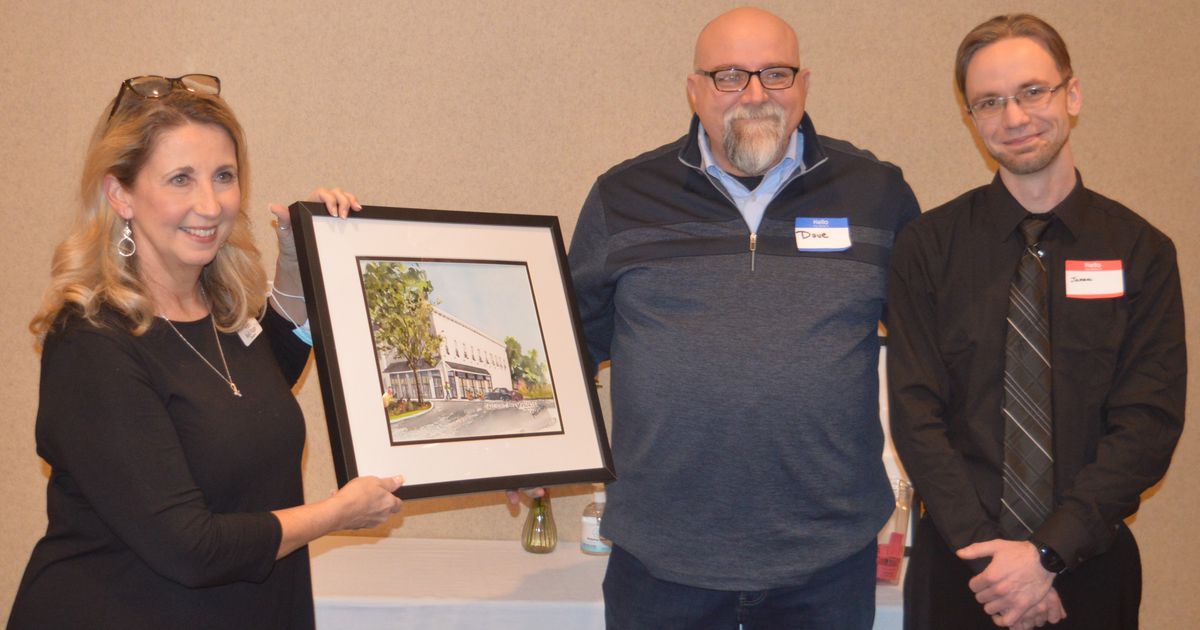 “Both of these companies have gone above and beyond for our community,” Bryan said. “They have worked hard within their businesses to keep our community nurtured and safe, following city and state guidelines during a pandemic, creating ways to keep spirits up and reduce costs to the community. Businesses like these two truly give back to our community and we thank you both for all you have done and continue to do for the Oxford community.

Three Chamber Champions were thanked for their service to the Chamber of Commerce and the Oxford community. Mike Rudolph, left, accepted his own award as well as one for his wife, Pate, who was unable to attend, and also honored Jennifer Marston. CONTRIBUTE/BOB RATTERMAN 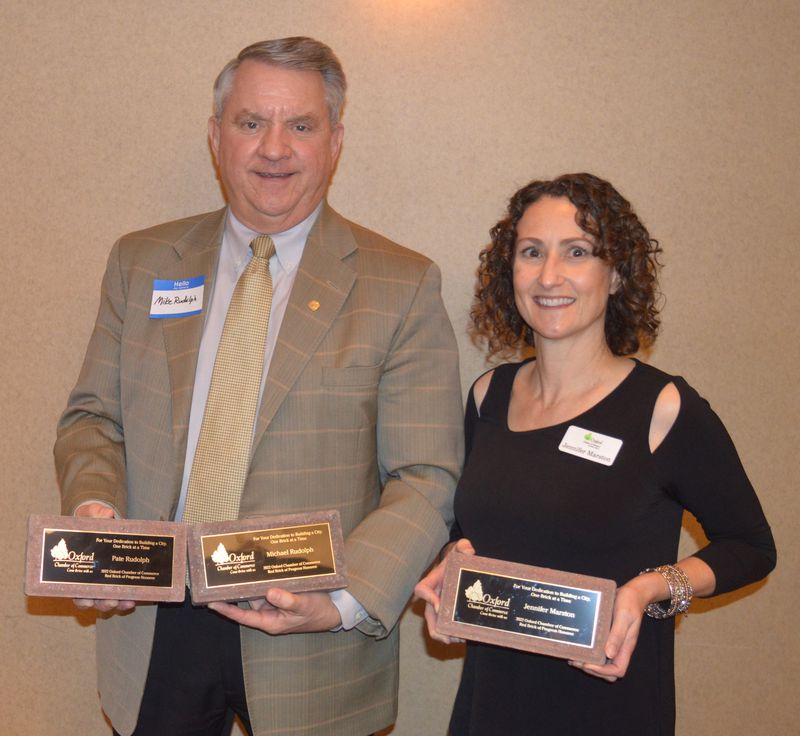 Chamber of Commerce and the Oxford community. Mike Rudolph, left, accepted his own award as well as one for his wife, Pate, who was unable to attend, and also honored Jennifer Marston. CONTRIBUTE/BOB RATTERMAN” class=”placeholder-image “/>

Three Chamber Champions were thanked for their service to the Chamber of Commerce and the Oxford community. Mike Rudolph, left, accepted his own award as well as one for his wife, Pate, who was unable to attend, and also honored Jennifer Marston. CONTRIBUTE/BOB RATTERMAN

He read two nominations for Gaslight Brewhouse, the first citing community support and messages left on their takeout boxes. The other nomination cited the giveaways and specials they provide.

“I nominate Gaslight Brewhouse because they have always put the community first with many programs throughout the year,” reads this second nomination. “They’re giving away a burger of the month and donating $1 per burger to local charity Luna Cares to help women with cancer. They give away free food to veterans on Veterans Day every year. They have also provided Thanksgiving meals to the less fortunate since taking over from Scotty’s Brewhouse in 2019. Even during COVID, Gaslight has donated over 400 meals through partnerships with the Talawanda School District and the Center for Oxford Family Resources. Finally, they hold a toy drive every year and the staff wraps these gifts to give to kids 12 and under.

The former noted their efforts to give back to patients and the community and try to find ways to give back, both personally and through the company.

The second nomination read, “I nominate Gloyeske Family Chiropractic for the dedication they give to our community. They have come up with paid options which I am sure helps a lot in better affording the chiropractic care they provide as well as always checking in with their patients to make sure they are ok and to getting patients in even after a long day of already being there just to make sure they are taken care of. I highly recommend them to anyone for their chiropractic needs.

The award was accepted by Brad Gloyeske and Mandy Gloyeske.

Jennifer Marston was recognized as a chamber champion for always being willing to serve for any chamber-related event as well as her six-year service on the board. The meeting marked the end of his term on the Board. She has served as a House Representative on the city’s Student Community Relations Commission, is currently president of the Oxford Kiwanis Club, and does so while working full-time at the animal care clinic.

Pate Rudolph was unable to attend the meeting and her award was accepted by her husband, Mike, who also received one of the red bricks awarded for recognition, along with Marston.

Mike Rudolph was recognized for many years on the Chamber’s Board of Directors, including as Chair and for his service to the MBA Committee. It also provides time for many other community endeavors.

Pate Rudolph has been called a blessing to the community, donating time to several endeavors, especially the wine festival. She previously worked with the Miami Performing Arts Series, but has now joined Mike’s office at New York Life.

“The two together have become a dynamic duo within our community. They are always there to lend a hand to all of their family, friends, customers and community,” Bryan said. “During COVID they supported all of our local businesses and walked around delivering cookies and asking if they needed anything, did a Zoom call with the chamber and businesses to be able to discuss things related to COVID that could possibly help another company hear other ideas. They are the true meaning of people who support and commit to our community and we are so happy that you have chosen Oxford to live, work and play.

In its president’s report, Riggs said the chamber has seen growth in membership over the past year, despite the pandemic, and mentioned several services that help businesses over the past year. She said her husband, David, works with the Small Business Development Center and has helped local businesses navigate grants and other demands brought on by the pandemic.

She said they have started a series of workshops, the first “Branding and Positioning Your Business” held in November and another scheduled for February 3 “Maximizing Your Chamber Benefits”. She said they are updating their website to allow members to post new information about their business.

Riggs urged everyone to mark their calendars for this year’s Craft Beer and Wine Festival on May 21. She said it was held in the fall of last year, pushed back by the pandemic, and some people said they were in favor of keeping it but she says there are too many others Oktoberfest events and happenings in the fall.

“We love being the event to kick off the summer,” she said.

The evening’s keynote speaker was Chase Kreger, CEO of Maximize Value, a company created to help people thrive in business.

He said his comments relate to the ideas used in the book, setting out ten rules for influencing people, which he says apply to businesses as well as individuals. One involved a quote, “Different is better than better,” which he explained was about making yourself unique in order to be memorable to others who might need your service.

Another rule involved having clear priorities, which he illustrated with the quote, “The man who chases two rabbits catches none.” Having five priorities, he says, means you have none.

Another rule concerned customer service, urging chamber members: “Don’t find customers for your products, find products for your customers.” This, he said, will entice people to come to you with what they need and if you can meet that need, they will remain customers.