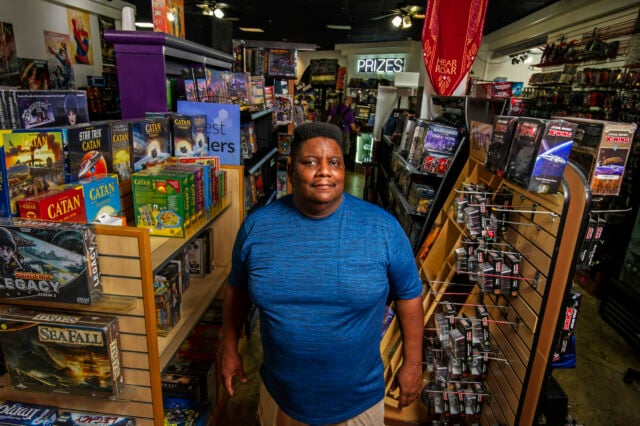 This story has been updated.

Editor’s note: This story first appeared in the July 1 Decaturish electronic edition. The electronic edition is an exclusive product for our paying supporters. To become a paid supporter for as little as $6 per month, visit supportmylocalnews.com

Greater Decatur, Georgia â€” Tony Cade spends his days building one community, one comic and one game at a time.

He owns one of the few stores in the nearly empty North DeKalb mall. The future of Challenges Games and Comics is still unknown, as the mall is set to be redeveloped as a mixed-use project. Cade is looking for a new space for his store and hopes to stay in the area.

Challenges will celebrate its ninth year of operation in November.

â€œI know for a fact that we are going to have to move somewhere. Even though we were lucky enough to be part of the new plans, we still have to go somewhere when they do the construction,â€ Cade said.

The project’s estimated completion date is 2028. The plan also shows nearly 50,000 square feet allocated for a grocery store, but does not name the store. To see previous renderings of the plan obtained by Decaturish, click here. The project will reserve 10% of units for workforce housing and will include a business incubator. The developer asks nothing in exchange for providing affordable units.

The DeKalb County Commission in a meeting on May 26 approved rezoning for the project.

Edens has so far refused to discuss the project outside of public meetings.

Comics for Kids at Challenges Games and Comics in the North DeKalb Mall on June 17, 2022. Photo by Dean Hesse.

Cade has been collecting comics and playing strategy games since he was around nine years old.

â€œMy father worked in the restaurant business. He was a manager at the Atlanta airport,â€ Cade said. â€œPeople used to buy comics and stuff while waiting for their plane, and they would drop the comics. My dad used to pick up the comics and bring them home to me. That’s how I started reading comics.

As a child, he was hanging out on his front porch one day when a neighborhood kid passed by and asked if Cade collected comic books too. He said, “Yeah, I collect comics,” and he went to see his new friend’s comic book collection.

“I have a little stack of comics in the house on the shelf,” Cade said. â€œI go to this kid, and he has rows of long boxes of comic books all wrapped up and boarded up. [It] completely blows my little mind.

Cade’s father was supportive of this new interest and soon they began attending comic book conventions. Cade would receive a $20 bill and get as many comics as possible in quarter boxes containing comics to sell for 25 cents.

Cade also learned to play chess at age eight, and by age nine he was playing in tournament chess. Chess exposed Cade to other strategy games like Dungeons and Dragons.

In college, Cade majored in journalism and began to take an interest in photography. He was on the newspaper team at his junior college.

In the early 1990s, Cade’s friend Tim Cummings approached him one day and told him he wanted to open a comic book store.

Cade was originally meant to be a silent partner, providing back issues of the comics for the company. Another friend, Don Hillsman – who is a cartoonist – also got involved in the business. The trio got together and opened a comic book store, an art studio, and a photography studio called Midtown Studio.

They rented space from Cade’s hairdresser for a time and had to move to another space in 1994. The company changed its name to Quantum Comics. Back then it was just a comic book store.

â€œThen my buddy Tim split up and had to get out of the business,â€ Cade said. “Basically, I took it all, packed it all up, and reopened Stone Mountain as Dragon’s Horde.”

Eight years ago, Cade moved his business to the North DeKalb Mall.

â€œThis place here was an arcade for over 30 years. I used to play here when I was a kid in the 80s. The name of this one was Challenges Amusement Arcade,â€ Cade said. â€œBeing given that the signage and stuff was historic, and I was able to save some of the neon lights, I’m like let’s go ahead and change the name to Challenges Games and Comics ’cause anyone who grew up in this area knows this arcade.

He added that Challenges is like a landmark for those who grew up in the area. 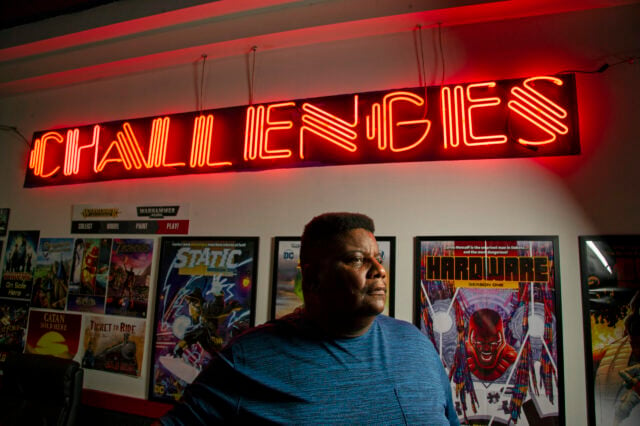 Cade also ran the Atlanta Science Fiction and Fantasy Expo at the mall before the COVID-19 pandemic. The exhibition featured over 50 vendors and 60 hours of programming. The expo was free to the public and was one of Atlanta’s largest free events, Cade said.

When the interior of the North DeKalb Mall closed, “that whole dream of when we’ll do our next show faded away,” Cade said.

For now, the store remains open for comic and game sales, community events, and tournaments. Challenges offers a wide variety of inventory ranging from anime, gunpla and model kits, board games, miniatures and paintings, comics, action figures and clothing.

â€œMy business idea has always been to grow my own community. A lot of the Magic players that we’re here now for Magic: The Gathering, they’re all kids that we taught to play Magic: The Gathering,â€ Cade said. “From the years I’ve been here in the mall, I’ve taught them how to play something when they were in elementary school, and now they go to college and I only watch them during school hours. summer when they come home from college.”

Decatur’s Matt Senrad said he goes to the challenges every Friday night.

â€œMaybe six to eight kids come around 3-3:30 after school, and we eat pizza, play games, then we come here and play at 6:30, then we come home at midnight,â€ Semrad said. .

Seth Bellenguez has been coming to the Challenges for four years.

â€œI would say this place is really cozy. There’s a lot of game stores there that like you to go and play it, but you don’t really feel like it’s a safe place, like it’s a place you want to have fun and create memories. I think Challenges absolutely has that kind of warm atmosphere that makes it a fun and heartwarming place,â€ Bellenguez said during a game of Magic: The Gathering on Friday, June 17.

Some of Cade’s customers are people he taught to play Pokemon as kids, who are now in their 40s and bring their kids into the shop. 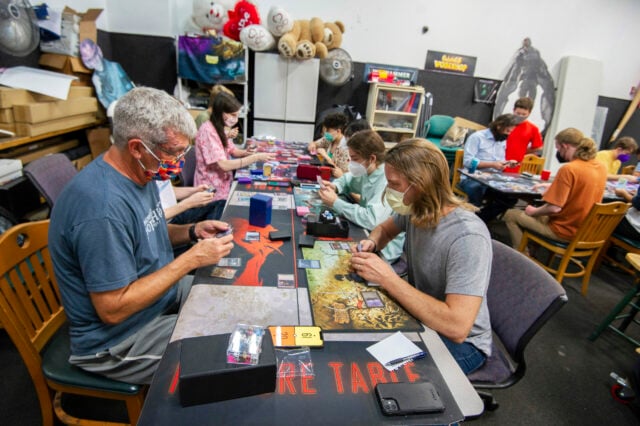 Matt Semrad, left, and Justin Brunson join others in playing Magic: The Gathering at a recent Friday night at Challenges Games and Comics. Photo taken by Dean Hesse. 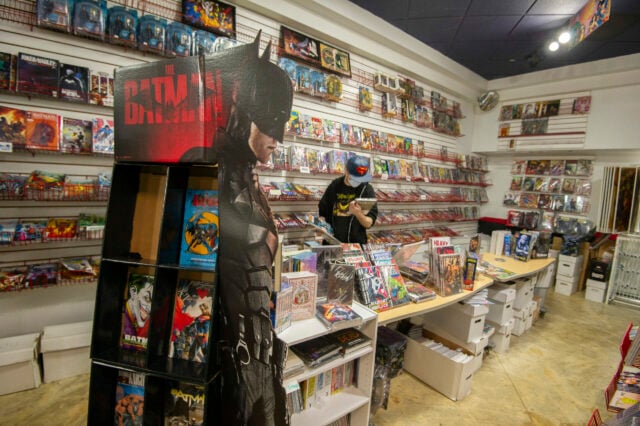 Zack Hill discovers the comics at Challenges Games and Comics on June 17, 2022. Photo by Dean Hesse. 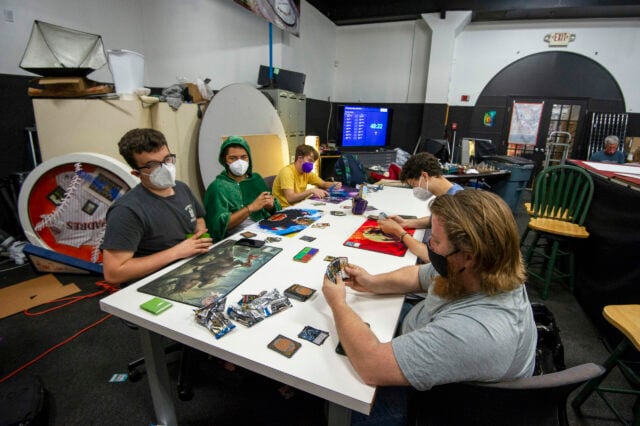 Players gather at Challenges Games and Comics on a recent Friday night to play Magic: The Gathering. Photo taken by Dean Hesse. 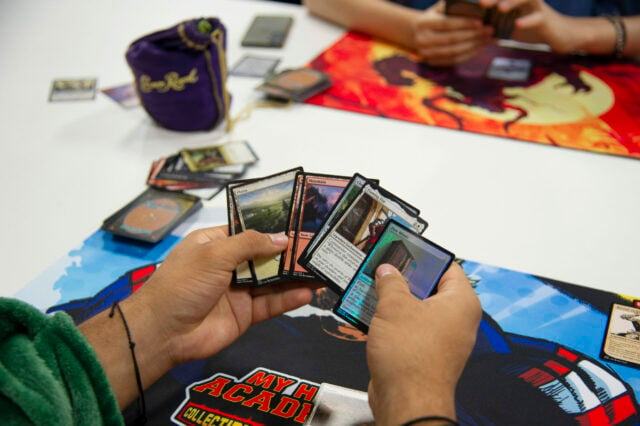 Seth Bellenguez checks his cards during a game of Magic: The Gathering on a recent Friday night at Challenges Games and Comics. Photo taken by Dean Hesse. 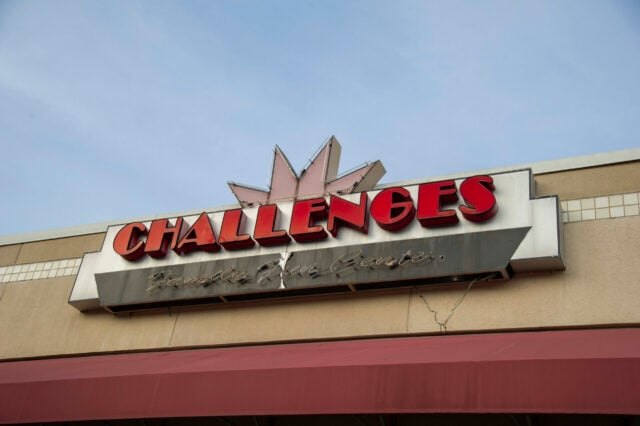 If you appreciate our work, thank you become a paying supporter. For as little as $6 a month, you can help us keep you up to date with your community. To become a supporter, click here.

Want Decaturish delivered to your inbox every day? Subscribe to our free newsletter by clicking here.

10 Summer Reads Chosen by the Experts at Ragged-Cover Bookstores