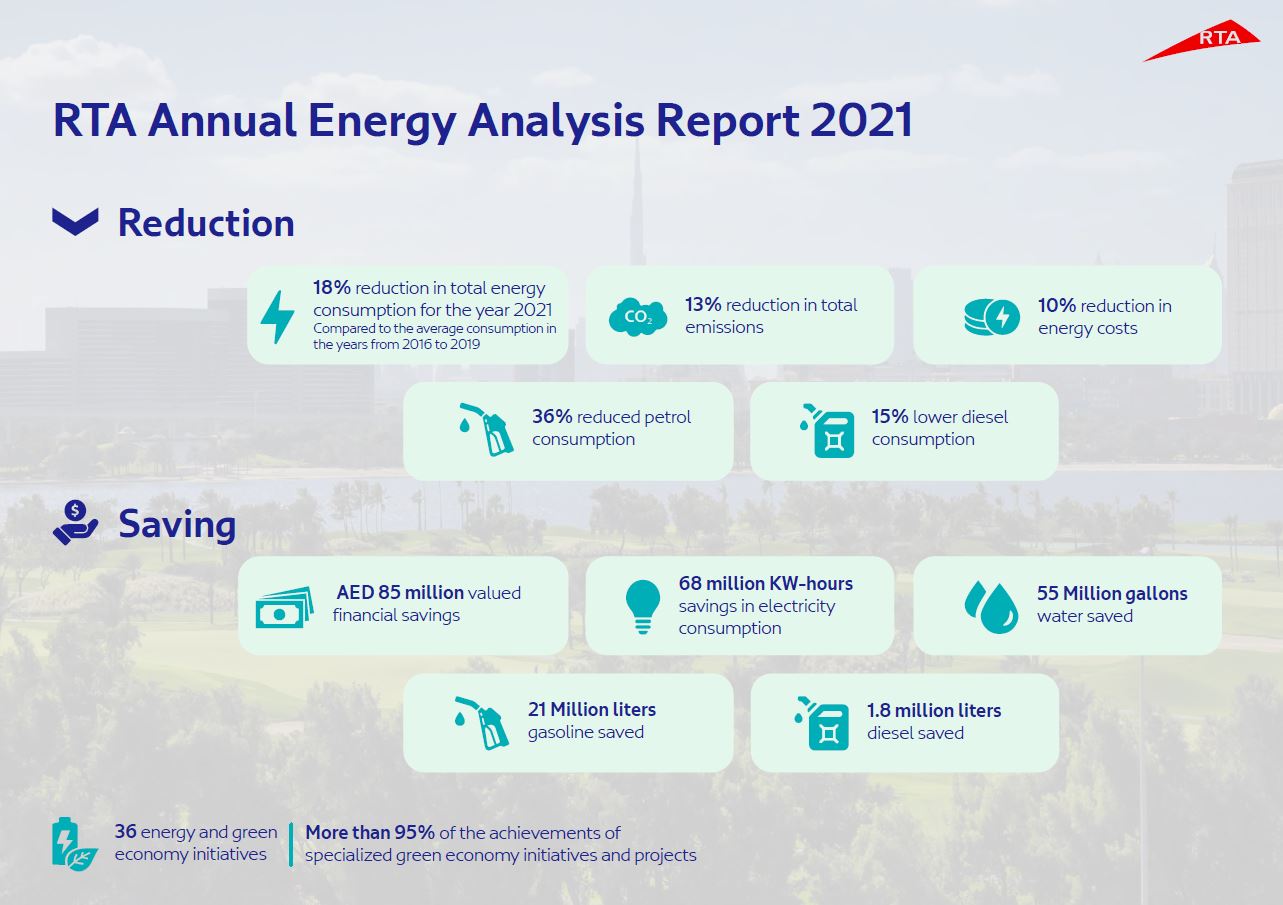 His Excellency Mattar Al Tayer, Chief Executive Officer, Chairman of the Board of the Roads and Transport Authority (RTA) announced that RTA has achieved the targeted 2021 energy efficiency performance indicators and reduced the total consumption of energy in all operations and projects by 18%, compared to the average consumption from 2016 to 2019. It also succeeded in reducing total emissions by 13% and energy costs by 10% during the same period.

“Sustainability is a key pillar of RTA’s strategic goals and objectives, and the concept of sustainability has become deeply embedded in RTA’s business performance. Protecting the environment, optimizing the use of energy, reducing carbon emissions and ensuring the sustainability of assets have become priorities. RTA has a well-defined roadmap that aims to achieve zero public transport emissions in Dubai by 2050. In the process, RTA becomes the first government entity in the Middle East and North Africa to develop an integrated roadmap targeting public transport and its infrastructure,” Al Tayer said.

“Compared to the average for the years 2016 to 2019, the 2021 RTA energy analysis report showed a decrease in total energy consumption by 18% and gasoline consumption by 36%. The decline is attributed to the increased use of hybrid and electric taxis by Dubai Taxi Corporation, as well as a 15% drop in diesel consumption, despite an increase in the public bus fleet.
“RTA has embarked on a process of modernizing its old fleet of buses to replace them with modern buses equipped with eco-responsible Euro 6 engines that are compatible with European specifications in terms of carbon emissions. The report also indicated an 11% increase in electricity consumption, following the operation of the 15-kilometre Dubai Metro Route 2020, which includes seven stations,” Al Tayer explained.

“RTA implemented 36 energy and green economy initiatives in 2021, resulting in record savings of AED85 million, 68 million kilowatt-hours of electricity, 55 million gallons of water, 21 million liters of gasoline, 1.8 million liters of diesel and a reduction of around 86 tonnes of carbon dioxide equivalent. It has also diverted around 450,000 tonnes of waste from landfill through effective waste management practices,” said explained Al Tayer.

“RTA has achieved over 95% of green economy initiatives and projects, and future directions are guided by a range of factors, including soft and shared mobility, sustainable transport, circular economy, autonomous vehicles for passengers and cargo, and the development of services based on customer needs and future skills,” concluded Al Tayer.

The year 2021 saw the official commissioning of the Dubai Metro Route 2020 project, which serves densely populated neighborhoods with a population of 270,000. The layout of the route was based on several perimeters, namely the expected number of passengers in each station, the commercial activities around and the link with other means of public transport at each station such as buses, which contribute to Dubai’s sustainable growth.

The year also saw the completion of numerous road and bridge projects, highlighted by the construction of roads spanning 138 kilometers of lane with 9 flyovers to serve Expo 2020 Dubai. It has opened model public bus stations, pedestrian bridges and cycle lanes to transform Dubai into a bicycle-friendly city, which involves providing appropriate options to encourage people to take up cycling.