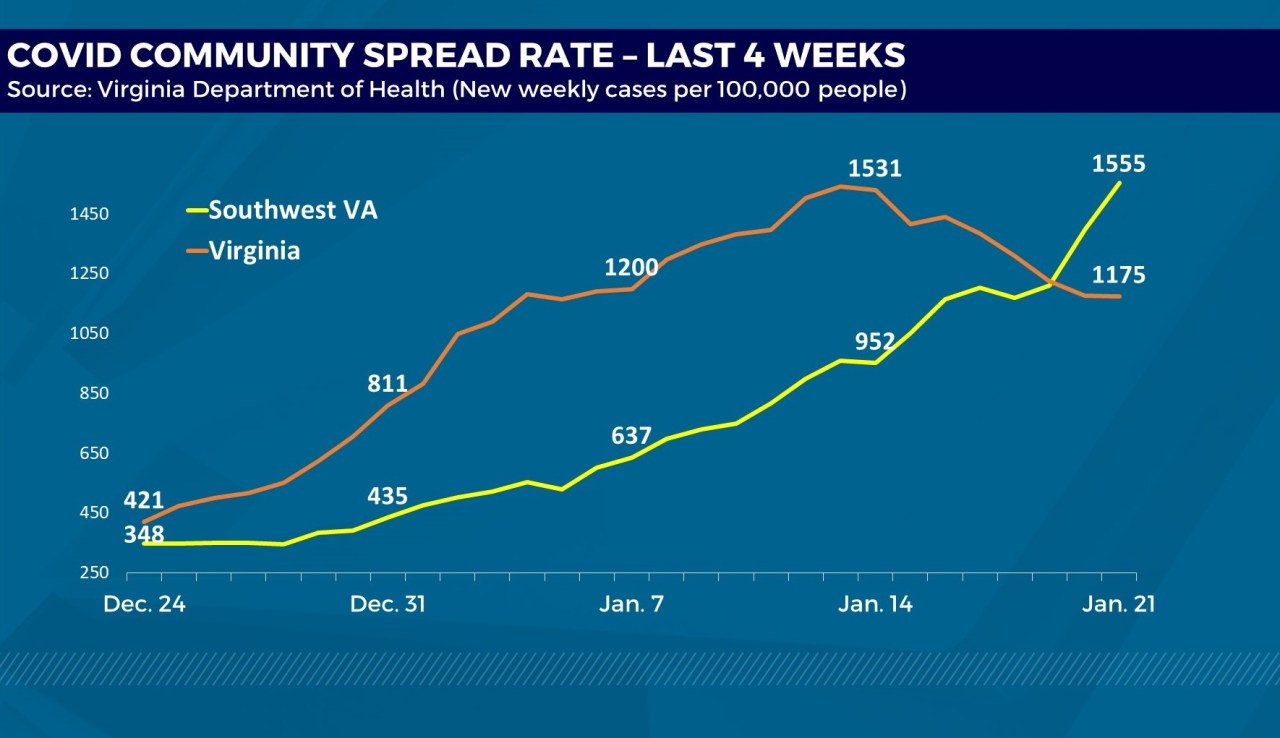 RICHMOND, Va. (WJHL) – Southwest Virginia’s seven-day new COVID-19 case rate has increased 28% over the past two days and is now higher than the peak rate reached at the statewide last week after the Virginia Department of Health (VDH) reported 823 new cases on Friday.

That total is the second-highest single-day record ever for the rural nine-county region. The VDH reported a record 1,131 new cases on Thursday. The region’s seven-day rolling average of new cases per 100,000 population is 1,555, 32% higher than Virginia’s statewide rate of 1,175.

When Virginia’s rate peaked at 1,543 just eight days ago, it was 61% higher than Southwest Virginia’s average of 960. Cases of the Omicron variant began sending much higher rates to urban areas of Virginia about 10 days before it happened in southwestern Virginia.

VDH reported no new deaths in the state on Friday and no new hospitalizations were reported in southwestern Virginia.

Each county has a higher rate than the state average at this point. Washington County (including Bristol) is highest at 1,750 – more than double its high during the Delta Variation surge – and Dickenson is lowest at 1,292.

The region’s vaccination rates are well below state and national averages.

According to VDH, the total number of confirmed and probable cases is 1,451,713.

VDH reports that there has been 13,232 confirmed coronavirus-related deaths across the state.

Below is a full breakdown of local cases of COVID-19hospitalizations and deaths in southwestern Virginia, with new case numbers on January 21:

Note: VDH does not report whether cases are active or recovered. County and community case totals may include active, recovered, confirmed and probable cases.

For complete coverage of the entire Commonwealth of Virginia, click HERE.