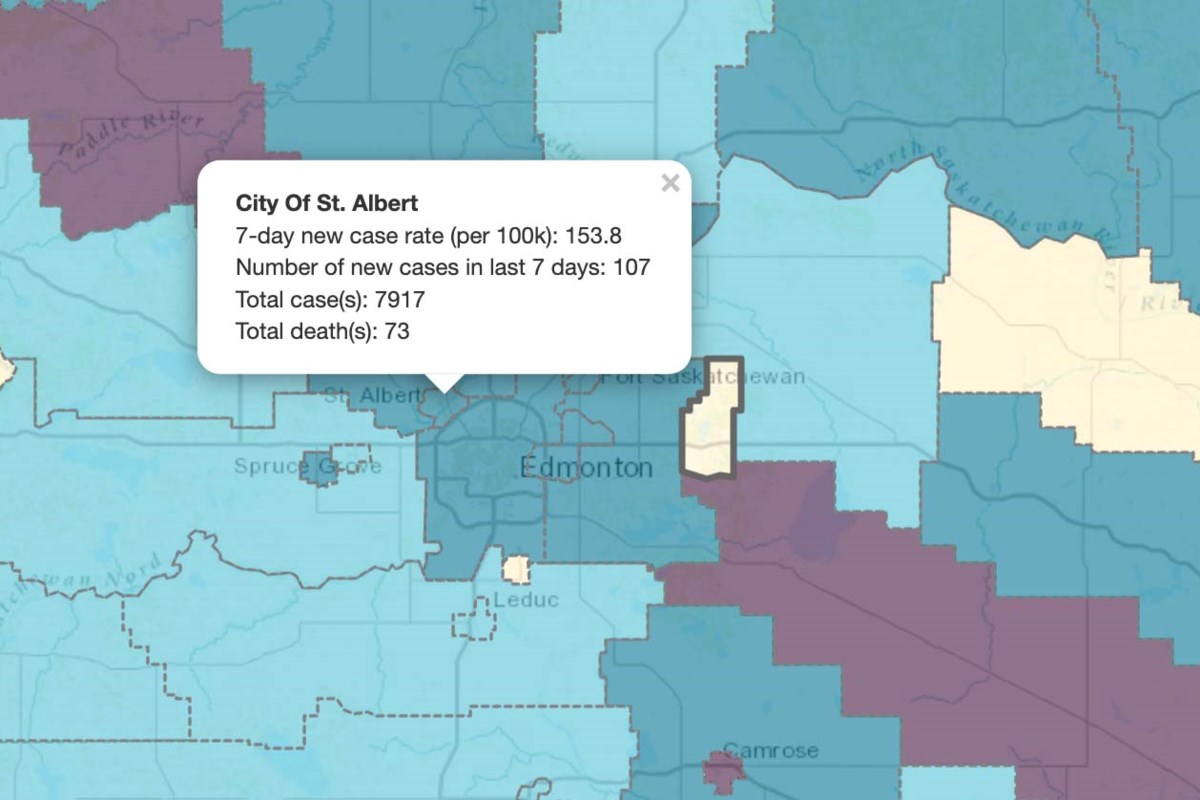 The province reported a slight increase in COVID-19 cases in St. Albert this week.

A total of 73 St. Albertans have died from COVID-19 since the pandemic began, according to the province.

Sturgeon County has seen a slight decrease in active COVID cases since the last report.

Sturgeon County recorded 31 new active cases of COVID from March 29 to April 4. The number of new cases reported on March 30 was 32.

The total number of people who have died from COVID-19 in Sturgeon County is 18, as reported by the province.

Fifteen residents of Morinville have died of COVID-19 since the start of the pandemic.

“It’s a concern, and we’re watching it closely, but it remains to be seen what further increase we’ll see, in particular, how that will translate into serious illnesses and hospital admissions,” Copping said.

Copping said the average PCR rate for the province was 26.3%.

Hospitalizations in the province have increased slightly, Copping said, but the number of intensive care patients with COVID has slightly decreased.

The province has reported 990 hospitalizations, ongoing since April 4. Of these, 44 people were reportedly in intensive care.

Data from the province, current to April 4, showed 4,104 people have died from COVID.

Dr. Deena Hinshaw, Alberta’s chief medical officer of health, said there were an average of four deaths per day from March 29 to April 4.

Province expanded eligibility for fourth doses of COVID vaccines to all residents and seniors of congregate care facilities; anyone aged 70 and over; and First Nations, Métis and Inuit aged 65 and over. From April 12, anyone in the expanded category, five months after their last injection, can book their fourth dose.

The province has also expanded eligibility for anyone who needs a fourth dose for travel purposes.

The province has announced that it is preparing to receive 10,000 doses of Novavax, a non-mRNA COVID vaccine. Starting April 12, anyone 18 and older can call 811 and make an appointment.

Eligibility for Paxlovid has been expanded to include First Nations, Métis, and Inuit people age 45 and older who are unvaccinated or have received a dose of a COVID vaccine, and all people living in continuing care.

Paxlovid is an oral antiviral used to treat mild to moderate COVID-19. Paxlovid was first approved in Canada on January 18. The antiviral, which comes in pill form and is prescribed by doctors, initially became available to some Albertans on January 31.

The return of surreal fashion