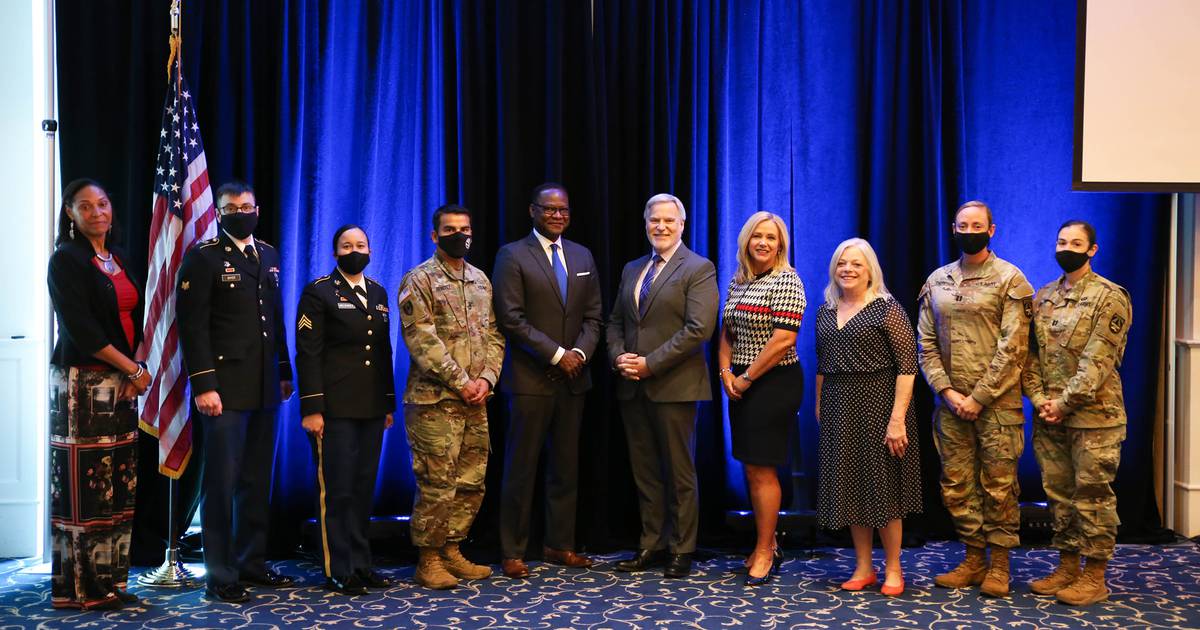 After a two-year pandemic dampened its festivities, the annual Harford County Chamber of Commerce Military Appreciation Luncheon is back and entirely in-person for the first time since 2019.

“We are all very excited about this event, especially being able to bring everyone together,” said Lauren Bottcher, director of marketing and communications for the chamber. “It’s an opportunity to just share the appreciation of the military.”

The 45th Annual Chamber Luncheon will be held May 19 at 11 a.m. at the Richlin Ballroom in Edgewood. Bottcher said lunch is free for military personnel and Aberdeen Proving Ground employees, but $45 for the general public. Individuals have until May 13 to register and can do so through the chamber’s website.

This year’s lead sponsor is Freedom Federal Credit Union. Credit Union President and CEO Michael MacPherson commented on how it has maintained a relationship with the military since its inception. After the Credit Union started in Baltimore in 1953, it moved to County Harford to support Edgewood Arsenal, which later became part of Aberdeen Proving Ground.

“We never lost touch with our roots,” MacPherson said. “The Military Appreciation Luncheon is an acknowledgment of all that the community has brought to the Harford County community and beyond.”

MacPerson also welcomed the event’s return to an in-person capacity.

“Being able to see and talk to people you’re grateful to,” he said, “is a different level.”

Harford County Executive Barry Glassman stressed the importance of honoring Aberdeen Proving Ground, the county’s largest employer and his mother’s former workplace. She worked there as a real estate book agent for over 30 years.

“It’s probably hard to find a family that doesn’t have someone or a relative who worked for Aberdeen Proving Ground,” Glassman said. “The facility has always been woven into the fabric of the county.”

Different this year is that instead of a luncheon speaker, there will be a panel of three: Lisa Swoboda, senior director of the Maryland Department of Commerce’s Office of Military and Federal Affairs; Karen Holt, Deputy Director of the County Office of Community and Economic Development; and Jill McClune, from the Federal Outreach and Advisory Council of the Association of Defense Communities. This year’s topic of discussion is “Looking Back, Our Way Forward: Assessing the APG Defense Community Through the National Lens”.

Also honored at the luncheon will be Active Duty Military Personnel and Veterans, Gold Star Mothers and Heroes, Non-Commissioned Officer/Soldier of the Year and the Appellate Award recipient, presented to a volunteer who has demonstrated a significant level of commitment to the community, the military and the chamber. The award is named after General John G. Appel, who was a strong supporter of Aberdeen Proving Ground, the Army and Harford County.