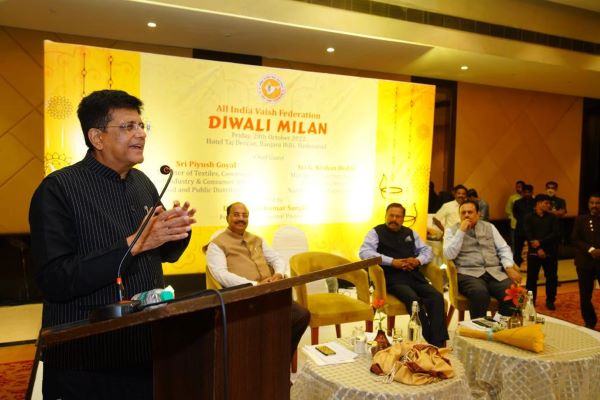 Piyush Goyal, Union Minister for Trade and Industry, Consumer Affairs, Food and Public Distribution and Textiles, urged Indian business community to give primacy to Indian-made products . He was addressing the All India Vaishya Federation (AIYF) in Hyderabad.

The minister stressed the need to promote industry and manufacturing in India and said this would help boost employment and bring prosperity in the lives of our citizens. Supporting Prime Minister Modi’s call for travelers and tourists to spend at least 5% of their travel budget on locally made products, the Minister said our talented artisans, artisans and entrepreneurs deserve to be supported and promoted.

Goyal pointed out that over the past 30 years India’s GDP has grown 11.8 times. He recalled that there was a time when much of the population focused on securing the basic necessities of life such as food, clothing and shelter. He observed that the situation has improved considerably now thanks to the government’s emphasis on structural reforms which ensure that people are freed from the constant struggle for the necessities of life.

He went on to say that the reform closest to his heart was the government’s success in building more than 12 crore toilets, bringing safe sanitation, a very basic necessity, to every home in the country. “It was not just a matter of toilets but of dignity and self-respect, especially for our women,” he said.

The minister said the government had ensured food security for nearly 80 million citizens by providing food grains under the National Food Security Act (NFSA) and an additional 5 kilos of food grains per person per month. He said it should be a matter of gratification for taxpayers that their money is well used to help those who really need it. 50 Crores of people are now receiving free and quality health care, clean water is now delivered to every household through taps as part of the Jal Jivan mission, he noted.

He characterized all these initiatives as fundamental work to ensure that our people, especially our youth, are freed to undertake activities that spearhead growth and development, helping us reap our incredible demographic dividend. . “Our youth are now free from the struggles of necessities and are very ambitious. They yearn to become innovators and entrepreneurs and drive growth,” he added.

The Minister spoke of the need to secure the basic needs of women, in particular that of menstrual hygiene. Expressing concern that girls are dropping out of school at the age of puberty, the minister pointed out that the government provides sanitary napkins at very low prices. He called for more outreach programs to educate women on various aspects of menstrual hygiene to protect and empower them. The minister asked the AIVF to strive to ensure that within the next year, every woman in the country is aware of and has access to sanitary napkins.

The minister stressed that India is ready to take decisive steps to become a developed nation, a vishwaguru. He said he was convinced that India’s huge youth population had the capacity to drive this quest forward. “India is the only bright spot in the world today. The world is looking towards India with great hope,” he added. He noted that developed countries now aspired to enter into FTAs ​​with India and said that the fastest FTA in the world was concluded between India and the United Arab Emirates in just 88 days.He added that other GCC countries were also preparing to sign FTAs ​​with India. ‘India.

The Minister spoke of the Prime Minister’s emphasis on the need to return to our roots and said India’s history, culture, traditions and value systems had great strength in them. He called for an end to social discrimination and said that divisive tendencies had no place in the New India. The minister referred to the “panch pran” given by Prime Minister Shri Narendra Modi and said that unity and unity pran is an integral part of panch pran. He said if India was to truly realize its immense potential, it was essential for the whole nation to work together with unity and unity.

He expressed his confidence that if the whole nation worked together as one, our children would learn of our efforts through their history books rather than the glory days of kings, Nizams and colonialism.