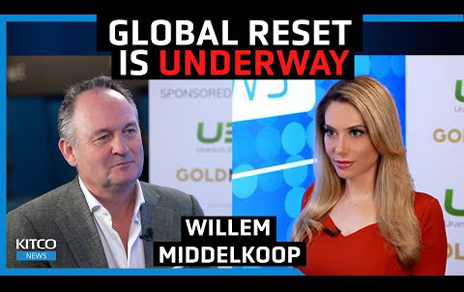 (Kitco News) – The world is already engaged in a financial “global war,” and the transition to a global reset is currently underway, according to Willem Middelkoop, founder of the Commodity Discovery Fund and author of “The Big Reset.”

“It’s a war, it’s a financial, economic war, and in my opinion, it’s World War III,” he said, noting that China has already shown economic hostility in ” no longer investing in US Treasuries, they add a lot of gold because it’s the anti-dollar.”

Speaking to Michelle Makori, Editor-in-Chief and Main Anchor of Kitco News at the Prospectors and Developers Association of Canada convention in Toronto, Middelkoop pointed out that the global reset would likely entail an overhaul of the current monetary system, in which the United States The dollar is no longer the dominant reserve currency.

“The thesis of the book is that one day we will have to find a new anchor for the global monetary system, so the dollar must be replaced. We know the IMF is working on this, they have the SDR, which is a basket of currencies We could have a digital SDR We have rolled out central bank digital currencies, you can create a basket of all these centrally backed digital currencies, have them managed by the IMF and use them to price products from basis, using them for oil prices. This could be an easy transition to a new phase for the international monetary system. We could also expect gold to be introduced back into the system to stabilize inflation,” a- he declared.

Middelkoop said the world has already split into two major economic blocs, the West and the East, which are currently engaged in a global economic war.

This economic battle has the potential to escalate into a hot war between East and West, and the trigger could be a conflict over Taiwan, he added.

China currently views Taiwan as a rogue province and has declared reunification with the island a top national priority.

“The most of [the military experts] say that China will move [towards action against Taiwan] in five to ten years. China is watching and studying what is happening to Russia and does not want to make the same mistake. Remember that China is gaining a lot more power without taking a shot because they are controlling Russia now. Without China, Russia is gone, financially,” he said.

On current monetary conditions, Middelkoop said a “severe recession” is on the horizon and the Federal Reserve will likely pivot its monetary policy once it understands this economic risk.

Commenting on the recent 75 basis point rate hike this week, he said: “I think the Fed has been really scared of how inflation has taken off. In fact, the central banks are a little cornered because they’ve printed so much money to stimulate the economy and solve every crisis over the past two decades, and now inflation is in the red and they need to act now, they must therefore act quickly and take big steps. But, while they’re doing that, the economy is cooling down a bit and if you read the real estate reports in the United States, I think a recession is near, could be a severe recession, and once The Federal Reserve understands that there could be a severe recession underway and prices are falling because of these recession risks, so they could pivot and stop raising rates sooner rather than later.”

He noted that in a few months to weeks people will be more stressed about the state of the US economy.

Above all, gold could also be reintroduced into the global financial system and be “revalued”.

For more information on how the Federal Reserve has talked about suppressing the price of gold in the past, and for the appropriate asset allocation percentage in gold and bitcoin, watch the video below above.