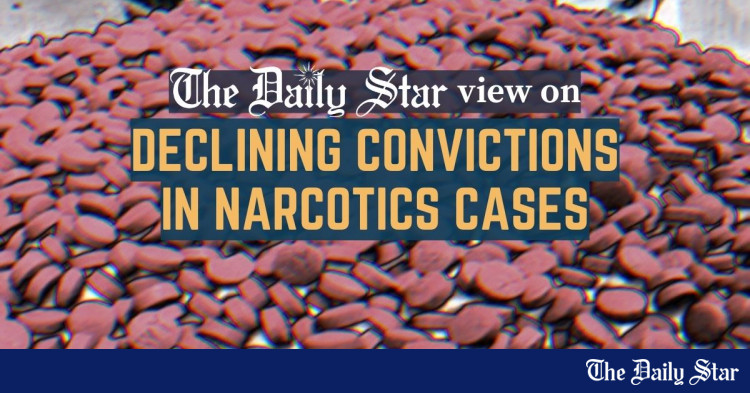 The snail’s pace at which Bangladesh’s justice system operates, resulting in lower-than-expected conviction rates, has for some time been a major cause for concern, particularly when it comes to gender-based violence. Recently, this issue was also flagged in the Department of Narcotics Control (DNC) Annual Drug Report 2021, which revealed that conviction rates in narcotics cases have been steadily declining for the past eight years. From 64% in 2014, the rate fell to 40% in 2021.

By delaying these cases, the competent authorities not only fail to deal with drug cases and related crimes, but also increase the risks that innocent citizens will be caught up in long cases, with little chance of obtaining justice in the near future. coming.

On Monday, the daily also reported on a narcotics case that remained stuck in the system for 18 years before the defendants were finally acquitted, after the charges against them could not be proven. This, unfortunately, has become the norm rather than the exception. Despite the fact that the DNC appointed 68 prosecutors across the country in 2019 to improve the conviction rate and expedite the processing of long-pending cases, the report revealed that a total of 73,312 cases are currently pending before the tribunal. According to DNC officials and attorneys, flawed records, weak case investigations and reporting, and the absence of credible witnesses are the main reasons for this sad state of affairs. Witness statements were particularly mentioned as a thorn in the side of the prosecution, since proof of the seizure can only be given by statements and not by video footage, which often exists during narcotics raids.

As the Evidence (Amendment) Act 2022 will soon allow electronic records and digital data to be permitted in court, we find it difficult to understand how it is possible for prosecution witnesses – including officers charged with seize narcotics – fail to appear in court. For example, this daily found court documents from a case where the investigator himself did not appear in court to testify, despite several summonses to appear.

This apathy on the part of narcotics control officials is completely unacceptable, especially since DNC data suggests that the smuggling of narcotics, particularly yaba, has increased in 2021 compared to the previous year. . Is this also the reason why a significant proportion of narcotics cases still seem to involve couriers from the lowest levels of organized groups responsible for drug trafficking? It’s no secret that the vast amounts of drugs smuggled into the country necessitate an organized criminal network. Yet we rarely see high-profile arrests, let alone convictions, in this regard.

We must also remember that no one is guilty unless proven in court. By delaying these cases, the competent authorities not only fail to deal with drug cases and related crimes, but also increase the risks that innocent citizens will be caught up in long cases, with little chance of obtaining justice in the near future. coming.