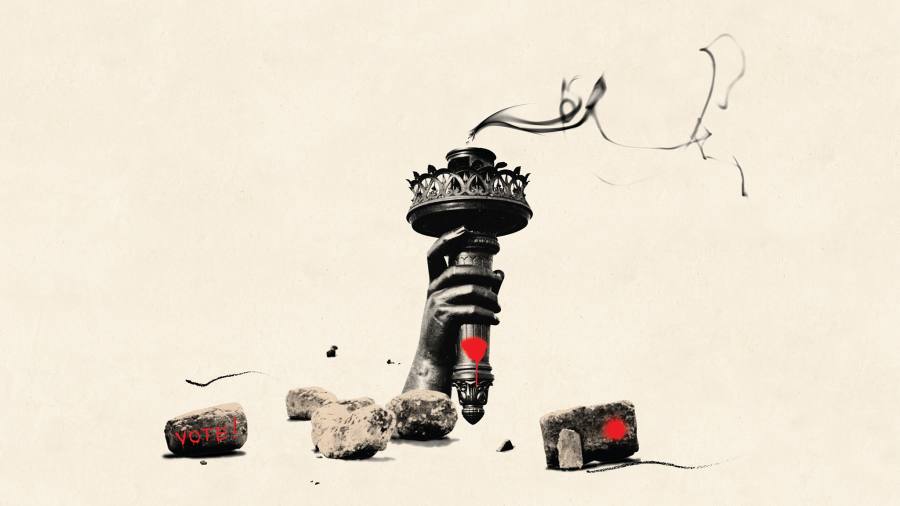 Last week I was on an American TV show with Yuval Noah Harari, the Israeli professor and author of Sapiens: A Brief History of Humankind. During the conversation, host Bill Maher lamented that a “slate of Holocaust deniers” are running in the US midterm elections next week. Harari grimaced and solemnly suggested that American democracy is now so troubled that “the next presidential election could be the last democratic election in United States history.” He added: “It’s not a great chance, but it could be.”

Maher let the comment slide. Me too. But as I left the set later that night, I was shocked. Just a few years ago, it would have been hard to imagine anyone suggesting on mainstream television that America’s electoral system might be doomed.

Harari is not a brand. He is an erudite and thoughtful historian. The most surprising aspect of the moment was that it didn’t seem so shocking at all. Predicting the death of American democracy has become almost normal.

The main reason, of course, is that a former US President, Donald Trump, continues to lie about the 2020 election. In doing so, he refused to accept the foundation of a functioning democracy, the peaceful transfer of power . If he were the only one to come up with conspiracy theories, their reach could be limited. But they’ve been embraced by other Republicans, repeated ad nauseam on social media, and repeated by his superfans at rallies. Some local election deniers are even changing laws to exert greater control over future polls.

The violent uprising of January 6, 2021 was in many ways the natural consequence of Trump’s anti-democratic rhetoric. Armed insurgents entered the US Capitol and attempted to prevent certification of Joe Biden’s victory. Fortunately, attempts to overthrow democracy have failed. But many now believe that Trump is “absolutely going to get the Republican nomination next time,” as Maher puts it. If so, he could win in 2024.

Members of Trump’s entourage tell me that if they return to office, not only will they seek revenge against those responsible for investigating the events of January 6, but they also plan to use a weak legal clause. known as ‘Schedule F’ to oust their opponents from public office. This second point is very important, given that some bureaucrats have worked to thwart the worst excesses of the Trump administration, as a new fascinating book by David Rothkopf, American resistance. What could loom in 2024, if not before, is the politics of revenge.

This explains why Democrats worry about the death of democracy. But what is equally striking is that Republicans are also expressing concern. A recent Quinnipiac University poll shows that 69% of Republicans believe democracy is under threat, exactly the same proportion as Democrats. Republicans don’t blame Trump for that. Either they agree with Trump’s lie that the 2020 election result was wrong, or they say “radical extremism” among Democrats is undermining American values.

Voters are losing faith in the idea that different viewpoints can be mediated in credible electoral ways or through regular forums for debate. As misinformation spreads, some people become radicalized. The horrific attack on Nancy Pelosi’s husband has raised concerns of further violence. A recent Reuters/Ipsos survey suggests that 40% of voters are now worried about voter intimidation during elections.

I suspect the other problem is that political differences are increasingly defined by personal allegiances and hatreds, rather than ideas. A Pew survey in August showed that 72% of Republicans view Democrats as immoral and dishonest, up from 47% in 2016. Almost as many Democrats also view Republicans in this light, with a similar dramatic increase in the past. six years. It’s tribalism.

Does this mean that Harari’s prediction about the possible demise of democracy is correct? Personally, I still find it hard to believe. After all, polarization and political violence have been a feature of American democracy from the very beginning, with periodic periods of significant progress. I still hope we get closer to one another.

But it may not be soon: Another eye-opening recent survey showed that while 71% of Americans now think democracy is under threat, only 7% consider solving the problem a national priority. In other words, the sense of crisis may need to deepen before there is a backlash. Which, of course, is why we need voices like Harari to scream and for everyone to remember feeling shocked.

Heritage Commerce Corp (NASDAQ:HTBK) will pay a dividend of $0.13 in three days